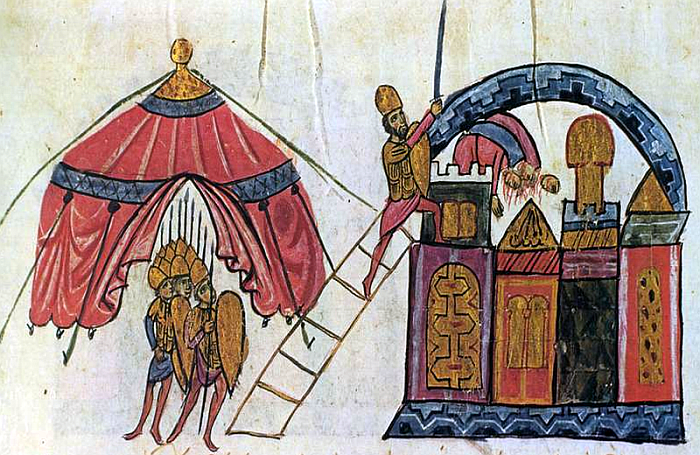 Death of a Patriarch: the murder of John VII of Jerusalem (†966) and Christian life in Early Islamic Palestine.

The lecture is followed by on optional drinks reception. Both are free to attend, but places are limited so booking is essential. You can book your place here.

In 966, the 38th orthodox Patriarch of Jerusalem, John VII, was found hiding in a cistern in the Church of the Anastasis, and was murdered by a mob that had been whipped up by the governor of the city, Muhammad ibn Sinaji. John’s body was then dragged into the atrium of the Martyrion of Constantine, tied to a pillar and publically burnt before a crowd. In the ensuing riot, the churches of the Anastasis and Holy Sion were set alight and severely damaged. This episode is unique across the broader span of the early Islamic period in terms of the violence directed at an important Christian leader. Yet to what extent was this reflective of the Patriarch’s status as the figurehead of a Christian ‘minority ‘community in an increasingly ‘Islamic’ world? Through a closer inspection of the context and timing of this murder, this paper will argue that it reveals a far more complex dynamic between Muslim authorities and Christian leaders than previously realised and one that overturns many of our existing assumptions of Christian life in the century before the Crusades.

Dr Daniel Reynolds is Lecturer in Byzantine History with particular interests in the Byzantine and early Islamic Levant (c.350-c.1099), “iconoclasm” and the history of peasant and non-elite communities (c.400-1000) in the Byzantine world. He is also currently co-director of the project “At the Crossroads of Empires: the Longobard Church of Sant’Ambrogio at Montecorvino Rovella (Salerno)”. His research focuses on the social and economic history of the Byzantium in the period c.300-c.1100, with particular interest in Byzantine and early Islamic Syria, Israel/Palestine and Jordan as well as southern Italy. His main interest is in the history and archaeology of the Christian communities of these regions in the early Middle Ages, which is used as a springboard from which to discuss broader patterns of diplomatic, economic and human contact across the early medieval Mediterranean and central Europe. Dr Reynolds addresses these themes using a multidisciplinary approach, harnessing my expertise in archaeology and material culture, combined with additional strengths in numismatics, epigraphy and his familiarity with the traditions of Greek and Arabic historical texts. In more recent years he has developed further interests and publications in iconoclasm in the Mediterranean c.700-c.900 as well as questions of identity in Byzantine and post-Byzantine provincial contexts (c.500-1100), and peasant communities in the Mediterranean, where he has collaborated with colleagues based in Vienna, Princeton, Oxford and Tate Britain.

He is also currently the co-director of the project “At the Crossroads of Empires: the Longobard Church of Sant’Ambrogio at Montecorvino Rovella (Salerno)”. This is a British Academy funded project, collaborating with Dr. Francesca Dell'Acqua, (Università di Salerno/ Birmingham) and Prof. Chiara Lambert (Università di Salerno), and a number of higher education intuitions across the UK, Italy and the Czech Republic. The project will conduct a full archaeological and historical analysis of the ninth-century Longobard Church of Sant’Ambrogio, Montecorvino Rovella. The project will also work closely with UNESCO and the European Commission with the aim of incorporating Sant’Ambrogio within its World Heritage List, ‘Italia Langobardorum’.