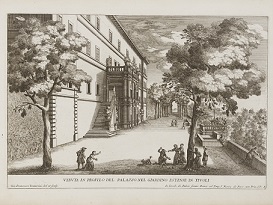 Health promotion and wellbeing in the early modern Italian household

followed by a drinks reception at the World Hertitage Site Visitor Centre.

Abstract: The place this paper explores is the ‘medical (or medicalised) household’. In the last few years the early modern household has been extensively studied as a key therapeutic space where the sick was taken care of and pharmaceutical remedies were devised, produced and experimented. In sixteenth-century Italy however, the household also became an important site for the promotion of health: householders were routinely engaged in a range of preventive activities aimed to preserve their good health and these practices also required equipping the house with items of material culture that would enable the pursuit of healthy lifestyle. Moreover, preoccupations regarding the salubriousness of the air one breathes within the home influenced profoundly architectural design of private residences. This paper will develop some of the ideas presented in the book Healthy Living in Renaissance Italy,which I recently co-authored with Tessa Storey, and explore the broader social, economic and intellectual contexts that might have favoured the appearance, in sixteenth-century Italy, of a medical culture of prevention centred upon the domestic environment and its routines.