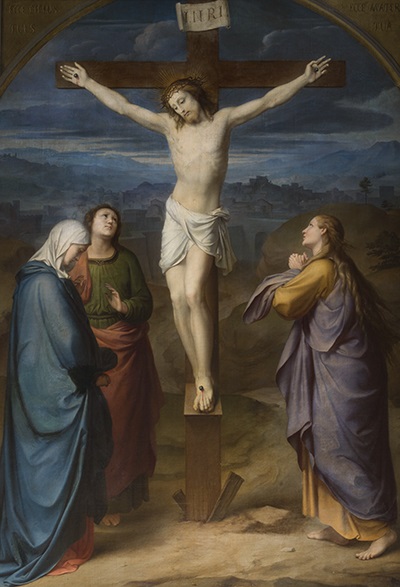 Please note the opening hours for the Visitors Centre: 9:30-16:30 (every day) – Free Admission

This exhibition focuses on a rare and largely neglected masterpiece by the Nazarene artist Franz von Rohden (1817-1903) currently preserved at Ushaw College. The painting, which depicts the Crucifixion of Our Lord with the Virgin Mary, St John and Mary Magdalene (1854), exemplifies the artistic creed of the Nazarene school of painting, founded in Rome by a group of dissident German artists in the early nineteenth century and characterised by the radical recourse to the pictorial repertoire of Italian pre-modern masters. While still relatively unknown in England today, the Nazarene movement exerted a tremendous influence on European Romanticism, the Gothic Revival and the British Pre-Raphaelites. The exhibition is organized by Dr Stefano Cracolici (MLaC) under the aegis of the Institute of Medieval and Early Modern Studies, the Centre of Visual Arts and Cultures, the Institute of Advanced Studies and the Centre for Catholic Studies.

Ushaw College presently preserves the largest and most revealing collection of Nazarene art in the country, and, in particular, the largest collection of Rohden’s paintings in the world. Strongly connected to the ‘Rome in the World Project’, led by Dr Cracolici and sponsored by the Leverhulme Trust, the exhibition illustrates the IMEMS’ commitment to foster researches on the long-lasting legacies of medieval and early modern cultures. The unmistaken Peruginesque style, featured in Rohden’s Crucifixion, represents a paradigmatic case study of this particular area of investigation. For its controversial aesthetics, religious orthodoxy and anachronistic gesture, Nazarene art strikes today as one of the most intractable voices in the modern debates on the periodization of Christian art.

Contemporary art critics praised Rohden’s art for his special use of light and colours. During the time of the exhibition, Dr Cracolici (MLaC) and Prof Beeby (Chemistry) will conduct a pilot spectrographic analysis of the painting’s colours, through a non-invasive technique already adopted to study the ink of Durham Cathedral’s manuscripts. This would allow the Durham team to verify whether Rohden employed pigments commonly used in the pre-modern period. If confirmed, this would suggest that not only was Rohden inspired by pre-modern models stylistically, but that he also tried to revive the pictorial techniques of the great old masters, opening new and exciting vistas on current Nazarene research.