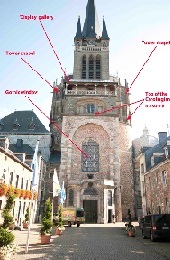 Rulers, Relics, and the Holiness of Power

Abstract: Ceremonial processions took place when relics of saints or of Christ’s passion were brought into a city or a palace, as represented on a little ivory plaque now in Trier, and described in the accounts of the way in which the passion-relics were received into Paris in the thirteenth century by King Louis VII. The similarity between these ‘entries’ of relics and entries of rulers in the case of the Trier plaque, and the attention lavished on relics in the case of the Paris example, underline the fact that relics were seen as every bit as powerful as rulers themselves. The places where these relics were enshrined could be stupendously impressive, as evidently was the lost Church of the Virgin of the Lighthouse in the Great Palace at Constantinople, or the Great Tower of the king of Bohemia’s Karlštejn Castle, the upper floor of which contained the amazingly lavish chapel of the Instruments of the Passion. The importance of such relics seems to point to the idea that rulers’ power was derived from their proximity to the divine. Passion-relics were especially important to rulers because of Christ’s status as a heavenly king whom earthly rulers sought to imitate, and to create associations between their power and his. Striking in this respect was the incorporation of relics, especially passion-relics, into the objects which formed the regalia of medieval rulers, for example the Holy Lance of the German emperors, with at its core what was believed to be the lance which had wounded Christ’s side on the cross, and the nails which attached him to it. Relics and regalia, however, can sometimes cast light on rulers’ power deriving from their personal relationships with their subjects. In Constantinople from at least the tenth century and in Paris in the thirteenth, the rulers alone had the right to show the passion-relics to their people, so that it was in a sense the rulers’ personal relationship with the people which gave them access to the supernatural power which the relics were believed to offer. This was institutionalised further by rulers organising formal ‘displays’ of relics and regalia – great events in which many people came in festive mode to view the relics and the regalia being held aloft – and believed that they would be closer to heaven for having seen this. Such ‘displays’ took place annually in the enormous Cattle Market in the New Town of Prague, and in the main market of the German city of Nuremberg, precisely on the site of a Jewish pogrom promoted by the king in 1349.

Biography: After studying for his PhD at the University of Birmingham, where his supervisor was Wendy Davies, and holding a Leverhulme Trust studentship in Paris under the direction of Georges Duby, David Rollason was appointed lecturer in history at Durham in 1977, where he has remained – as successively senior lecturer and professor and, since his retirement in 2013, emeritus professor in history and honorary fellow in archaeology. His first books, arising from his PhD thesis, were on the cult of saints and relics in Anglo-Saxon England. He then began to concentrate on the history of the kingdom of Northumbria, publishing Northumbria 500-1100: Creation and Destruction of a Kingdom as the culmination of this in 2003. He has devoted considerable effort to editing sources, especially Symeon of Durham, and the Durham Liber vitae, a three-volume edition of which, edited by himself and his wife Lynda, was published in 2007. Since then, he has concentrated first on committing to print his first-year teaching, published as Early Medieval Europe: The Birth of Western Society, and on sites of royal power, research on the latter being made possible by a Leverhulme Trust Major Research Fellowship from 2010 to 2013. He is currently seeking a publisher for the book arising from this, The Power of Place: Rulers and their Palaces, Landscapes, Cities, and Holy Places.