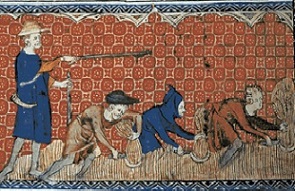 Abstract: This paper explores the concept of the family-land bond in north-east England and the long-term survival of families in village communities. The desire to keep the family name on the land has been interpreted as part of a peasant mentality in medieval England, but this talk will argue that this was not a trait unique to peasants in rural communities, emphasising the much broader power of place in society. Using examples from the estates of Durham Cathedral Priory, the Bishops of Durham, and the Earls of Northumberland, this paper will show that the long-term survival of families was affected more by changes in the institutional context and socio-economic trends than a latent desire to maintain the family holding. It goes on to explore physical and social mobility in late-medieval England, especially in relation to the widespread leasing of demesne land in the late-fourteenth century with the withdrawal from direct agricultural by medieval lords. Why did medieval lords resort to the leasing of around a fifth of agricultural land in England and in turn why did so many peasants take on these challenges?

Dr Alex Brown is an Addison Wheeler Research Fellow at Durham University, having previously been the EHS Postan Fellow at the Institute of Historical Research, University of London, 2012-13. In 2012 he won one of the new researchers’ prizes at the Economic History Society conference at Oxford University. He has published on Durham Priory’s response to the fifteenth-century recession in Northern History and the divergent development of the estates of Durham Priory and the Bishops of Durham between the fifteenth and sixteenth centuries in the Economic History Review. His forthcoming book entitled Recession and Recovery in the Palatinate of Durham, c.1400-1640 explores many of these changes in the economic and social history of rural society in the Durham region. He is also co-editing two collections of essays to appear in 2015 on Coping with Crisis: Re-Evaluating the Role of Crises in Economic and Social History and Custom and Commercialisation in English Rural Society, c.1350-c.1750.