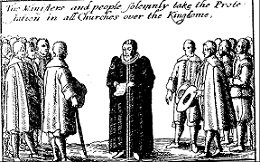 Space, Place & the Protestation: the political ecology of an oath

John Walter is Professor of History in the University of Essex. His central research interest is popular political culture in early modern England. This is research which has focused on crowd actions but which seeks to re-integrate the sources and methodologies of social and cultural history employed in a social history of politics with a re-invigorated political history. It brings together intensive archival research, often with a micro—historical focus, with theoretical interests in the nature of political society, the nature of early modern state and society, and the spaces therein for the exercise of popular political agency. This has resulted in a series of articles, some of which have been collected in Crowds and Popular Politics (2006) and a monograph Understanding Popular Violence (1999), which was awarded the Royal Historical Society Whitfield Prize. He is currently completing a study of the Protestation Oath (1641-2) which is to be published by OUP.