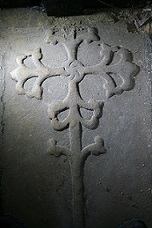 Commemoration and the power of place: explorations of regional identity in medieval northern England

Abstract: Our ongoing project exploring the production, use, and meaning of cross slab grave monuments in medieval northern England provides an excellent platform for addressing the importance of regional and local identities in defining commemorative behaviour and material culture. It is well known that stylistic variation in medieval memorial sculpture has a spatial dimension, but few studies have actually sought to theorize the role that connections to localities, local and regional audiences, and the social and cultural contexts of specific places played in the creation and display of commemorative monuments. Taking examples from the Cross Slabs in Northern England project, this talk will highlight the power of place in the material culture of death, memory, and belief in the Middle Ages, and demonstrate how particular memorial forms and styles are not simply a characteristic of a region's material culture, but rather were an active and meaningful way of generating shared understanding and values.

Dr Aleksandra McClain is a medieval archaeologist who specialises in the study of churches, commemoration, and the Anglo-Norman period. Her research has been focused on examinations of spatial and chronological patterns of church building, funerary commemoration, and elite patronage in northern England in the tenth, eleventh, and twelfth centuries. Her wider research interests include transition periods and cultural contact, the material culture of the Anglo-Scandinavian and Anglo-Norman periods, social and cultural identity, the nature and material expression of medieval lordship, the development of the medieval rural landscape, the material and ideological relationship between religious and secular authority, and patronage of ecclesiastical material culture. She also has a particular interest in the north of England, and the development of northern local and regional identities in the Middle Ages. Dr McClain is currently working on the project Cross Slabs in Northern England, 1000-1600 with Peter Ryder. She is on the executive committee for the Society for Church Archaeology, and is a Member of the Society for Medieval Archaeology.