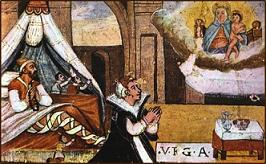 Miracles in the Italian Renaissance Home

Abstract: In the closing decades of the fifteenth century in Italy, a particular kind of domestic drama seized the public imagination. The period witnessed a proliferation of images and texts that recounted household disasters: babies tumbling down the stairs, children falling out of windows, marriages in jeopardy, along with afflictions caused by earthquakes, fires and a variety of illnesses. When calamity struck, men and women looked to the Virgin and saints for miraculous intervention. This paper explores the modes in which Renaissance Italians commemorated the ‘graces’ they received. The explosion of painting and print during this period provides a rich seam of evidence from which we can reconstruct the oft-neglected spiritual dimension of life in the Renaissance home.

Dr Mary Laven is a Reader in Early Modern History. Her work is grounded in the social and cultural history of early modern Italy and Europe, and she has particular interests in religion, gender, sociability, and material culture. Her publications include Virgins of Venice - translated into seven languages and for which she received the 2002 John Llewellyn Rhys prize – and Mission to China: Matteo Ricci and the Jesuit Encounter with the East. Dr Laven currently holds a Leverhulme Major Research Fellowship and is working on a new project: ‘Objects of Devotion: The Material Culture of Italian Renaissance Piety’. She is also one of the Principal Investigators of an interdisciplinary project, funded by the European Research Council: 'Domestic Devotions: The Place of Piety in the Renaissance Italian Household'.