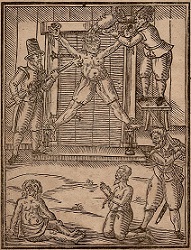 Beyond the Black Legend

Carmen Nocentelli is the author of Islands of Love: Europe, Asia and the Making of Early Modern Identity (Philadelphia: University of Pennsylvania Press, 2013). Her articles have appeared in such journals as PMLA , the Journal of Early Modern Cultural Studies, and Nuevo Texto Crítico. She has also contributed chapters to edited volumes, the most recent of which is "Made in India: How Meriton Latroon became an Englishman," in Indography: Writing the "Indian" in Early Modern England, ed. Jonathan Gil Harris (Palgrave, 2012). She is currently at work on a new comparative project devoted to the development and circulation of "Black Legend narratives"-- that is, narratives loosely patterned after the Black Legend of Spanish cruelty, tyranny and "blood" impurity.