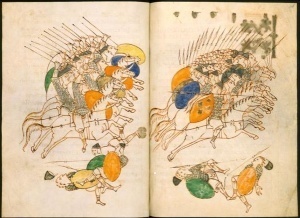 Elizabeth Lapina is studying the history of the crusades and is particularly interested in their understanding and representations in the Middle Ages.  More specifically, her research deals with the chronicles and iconography of the crusades in the twelfth and thirteenth ceturies.  She is currently preparing a book, provisionally entitled ''Things Done in a Foreign Land': Perceptions and Representations of the First Crusade,' in which she  examines several chronicles of the First Crusade and argues that they were more sophisticated than it is usually believed, revealing the existence of a number of competing visions on various aspects of the crusading.

The First Crusade was the most chronicled event of the Middle Ages. More than a dozen authors attempted to find an explanation for why a hundred thousand people left their homes to conquer Jerusalem from the "infidels" and how, after many trials and tribulations, they succeeded in doing so. For a medieval writer of history, the most natural way to make sense of the First Crusade was through drawing comparisons with the wars waged in the same locations by the Jews of the Old Testament, particularly the Maccabees. A series of scholars have recently established that references to Maccabees are omnipresent in crusading sources. In my paper I will attempt to demonstrate that the attitudes towards Maccabees in the chroniclers were far from uniform. A careful reading of the sources reveals a backlash against the assimilation of the crusaders to the Jewish warriors of the past. Although the chroniclers were more concerned with what they deemed to be proper uses of exegesis than with contemporary Jews, the assimilation of the Jews to Muslims in some of the texts suggests that anti-Jewish violence that accompanied some of the crusades was a logical by-product of crusading ideas.