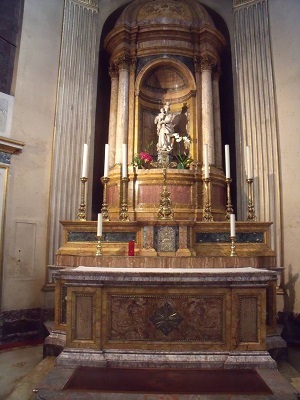 Dr Kelly's video is available via the IMEMS Facebook page.

Following the Reformation and the accession of Elizabeth I to the throne, all institutional expressions of female Catholic religious life were banned in England. Any woman wishing to enter religious life had to secretly pass to mainland Europe and enter a local convent there. However, in 1598, the first convent specifically dedicated to Englishwomen was established in Brussels and was to be followed by a further twenty-one establishments across Flanders and France with around four thousand women entering them over the following two hundred years. Most were enclosed convents, in theory cut off from the outside world. However, in practice the nuns were not isolated and their contacts and networks spread widely. In this talk, pilgrimage is considered as a means of survival and self-conscious identity formation – as well as the promotion of that identity. It considers buildings as designed to attract pilgrims, with the English convents in mainland Europe undertaking significant construction projects to ensure their survival as exile communities of women from the peripheries of mainland Europe. The final part of the talk focuses on the removal of a relic from the tomb of St Cuthbert in Durham Cathedral and its subsequent pilgrimage use by English women religious to maintain and create an English Catholic identity for a time when Catholicism was no longer officially proscribed in their homeland.

James E. Kelly is Sweeting Fellow in the History of Catholicism at Durham University. He was Principal Investigator of the AHRC-funded project, ‘Monks in Motion,’ which investigated the experience of the English and Welsh Benedictines in exile, c.1553–1800, and was a member of the AHRC-funded ‘Who Were the Nuns?’ project, acting as Project Manager of its follow-on initiative. He is joint general editor of the recently commissioned five-volume The Oxford History of British and Irish Catholicism.

Altar at the convent of the English Augustinian canonesses in Bruges.