Notes on the Iran-Iraq maritime boundary

Since the detention of fifteen British military personnel by Iranian forces in the northern Gulf on 23 March 2007 there has been much debate about whether the incident occurred in Iranian or Iraqi waters. The International Boundaries Research Unit has prepared the following notes and an illustrative map on boundary issues in the area, which we hope will help to inform the ongoing discussion. 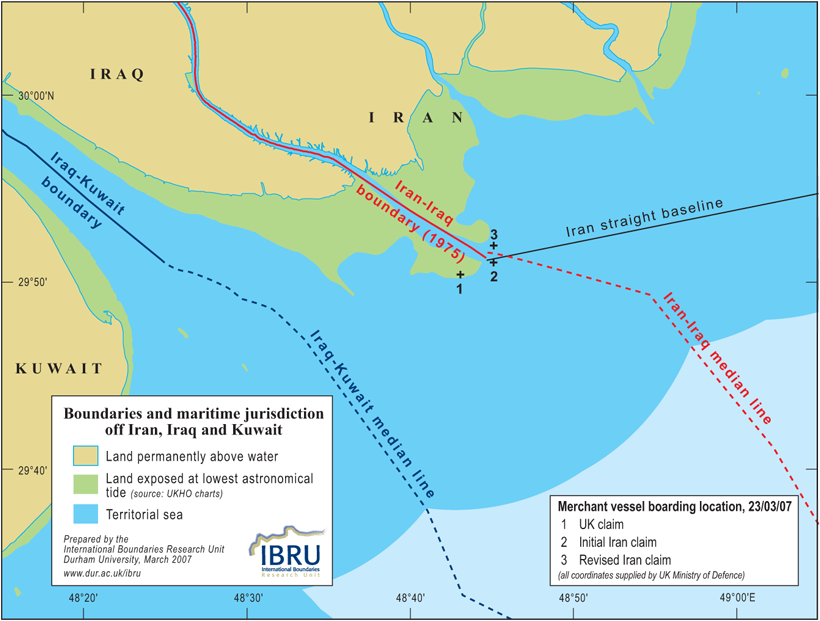 Is there an agreed boundary?

No maritime boundary has ever been agreed between Iran and Iraq. However, the boundary in the Shatt al Arab river agreed in 1975 (1) extends to the mouth of the river at the astronomical lowest low-water line, which is located nearly 10 nautical miles seaward of the high-water line that most maps show as the coastline. The southern terminal point of the agreed boundary lies just under 1.7 nautical miles northeast of the position at which the British Ministry of Defence claimed that incident on 23 March took place.

Cartographic depictions of the boundary situation

The line shown on the Ministry of Defence maps published on 28 March is described as the "Iraq/Iran Territorial Water Boundary". This is somewhat misleading. The line shown actually comprises (i) the section of the Iran-Iraq land boundary that follows the Shatt al Arab between the high- and low-water lines, and (ii) the median line between the two low-water lines running through the territorial sea.

The location of the arrest

Based on the coastal geography depicted on UKHO charts, the following points can be noted:

Whatever the true location of the incident, there are a number of reasons for exercising caution before making categorical assertions about whether the incident took place in Iraqi or Iranian waters:

The coastline in the northern Gulf is far from stable, and it is quite possible that there is a legitimate dispute over the alignment of the median line. Iranian charts may show a different low-water line from British charts, and Iran is perfectly entitled to define its baseline using Iranian charts. While it seems unlikely that the mouth of the Shatt al Arab would have shifted sufficiently for the point given by the Ministry of Defence to be located on the Iranian side of the median line, if the incident took place further east (as the Iranian government is claiming) then it is quite possible that Iran has legitimate grounds for its claim that the British boat was operating on the wrong side of what is a de facto if not a de jure boundary. It is also arguable that the unstable coastline represents a special circumstance that justifies delimiting a territorial sea boundary that departs from the median line.

Iran is not a party to UNCLOS, nor to its predecessor, the 1958 Geneva Convention on the Territorial Sea and the Contiguous Zone. Iran might therefore argue that it is not bound by the (identical) provisions of those conventions regarding baselines and territorial sea delimitation. However, if these these provisions have become customary international law (and that is widely considered to be the case) they would be binding on Iran.

Iran measures its territorial sea from a system of straight baselines. Even though the legitimacy of these baselines is questionable (straight baselines should only be drawn around coastlines which are deeply-indented or fringed with islands, and Iran's coastline is neither of these things) they certainly complicate the jurisdictional picture in the boundary area.

Issues relating to the 1975 boundary agreement

Article 2 of the 1975 protocol defining the land boundary made provision for the boundary to continue to follow the thalweg of the Shatt al Arab if the thalweg shifts as a result of natural causes; however, changes in the bed of the river "which would involve a change in the national character of the two state's respective territory" would not alter the course of the boundary. In Article 6 of the protocol it was agreed that a joint survey of the Shatt al Arab would be made at least every 10 years. No such joint survey appears to have taken place, so there may be a question as to whether the boundary still follows the line defined in 1975 or whether it actually follows the course of the thalweg of the river today.

Some commentators have cast doubt on whether the 1975 boundary agreement is still valid. It is true that Iraq unilaterally abrogated the agreement in September 1980 and declared its sovereignty over the whole of the Shatt al Arab. However, in the aftermath of the eight-year war between the two countries that followed, Saddam Hussein confirmed Iraq's recognition of the 1975 agreement in a letter to President Rafsanjani in August 1990.

One further point to note about the 1975 protocol: Article 7 provided for freedom of navigation for Iranian and Iraqi vessels "regardless of the delimitation of each country's territorial sea".

(1) The boundary was defined in the Treaty Relating to the State Boundary and Good Neighbourliness between Iran and Iraq signed in Baghdad in June 1975. The boundary agreement is often referred to as the "Algiers Agreement" because the two governments agreed on the principles for defining the boundary at a meeting in Algiers in March 1975.

(2) The coordinates for the two Iranian positional claims were supplied by the UK Ministry of Defence press office; they were not provided in the press briefing on 28 March 2007.

(3) The notes and map on this page were updated on 2 April 2007 following the acquisition of the coordinates of the two positions that the UK Ministry of Defence reported were supplied by the government of Iran. If anyone can supply coordinates from an authoritative Iranian source for either Iran's claimed boundary or the location of the vessel at the time of the arrest, IBRU will be pleased to add such information to this page.