A walk in the park: Drielandenpunt 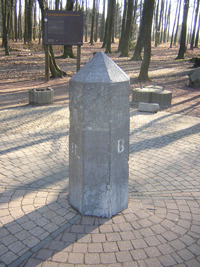 The border tripoint where the Netherlands, Germany and Belgium meet is a popular visitor attraction in itself, offering chips, beer, its own bus service and play facilities for children. Aidan Stradling recently paid a visit, and reports on his walk in the park.

Border tripoints are often fairly inaccessible, meeting at a confluence of rivers or atop a mountain peak. So it comes as a bit of a surprise to find one with a shop, cafés and a children’s adventure playground.

I first visited the meeting point of Germany, Belgium and the Netherlands as a boy of 13, in the days when passports were stamped at European borders. When, at the age of 46, I found myself planning a trip to Maastricht, I was determined to take time out to pay another visit to the place that had made such an impression on me all those years previously.

My route took me 18 miles by local bus from Maastricht, a pleasant town in the province of Limburg. Buses also run from nearby Aachen on the German side. The border town of Vaals is unusual in few respects, but by Dutch standards is distinctly hilly. This was clearly a factor in attracting the large number of lycra-clad cyclists that thronged the winding road up to the tripoint. I followed the clear instructions on the German side and took the walking route through the woods instead.

Although steeper than the road, the paths through the woods reach the tripoint in a shorter distance, following the German-Dutch border in a straight line for much of the way. It is about a mile’s walk. The main path is about a metre wide, with fir trees on either side overhanging the other country’s territory. I wondered if the national ownership of their respective fir cones changed once they’d fallen from one county’s tree onto the other country’s soil – a possible discussion topic for a future IBRU training workshop, perhaps?

The border path emerges by a car park that turns out to be in Belgium. This is obvious because there is a large observation tower named after Belgian king Boudewijn. The presence nearby of a café serving chips and beer confirms this beyond reasonable doubt. A few yards away in the Netherlands, another café announces its nationality with a large sign naming a well-known Dutch beer. It clearly refreshes the parts other beers don’t reach.

As my visit was before the start of the season – the attractions opened at the end of March – I was unable to sample either Belgian chips or Dutch beer. Instead, I turned my attention to the three bollards grouped by a nearby hedge. They turned out to be marking the highest point in the Netherlands. I stood there for a few moments, contemplating how it felt to be the highest person in the Netherlands. Suitably underwhelmed, I moved on.

A solitary stone pillar stood some feet away. Eight-sided and gently tapered, it discreetly marked the actual point where the three countries’ borders joined. Identified with a B, a D and NL on three of the sides, it was surrounded by a brick-paved area on which lines of bricks helpfully delineated the borders. An additional line of bricks marked the position of the former border with the once territory of Neutral Moresnet, now incorporated into Belgium. So this tripoint – or drielandenpunt – was once actually the meeting point of four territories, hence the name of the road back down into Vaals: Vierlandenstraat.

On the other side of the Belgian car park, another more elaborate bollard marked something else. No explanation was attached, though it stood by a road sign directing travellers to the local Belgian towns of Gemmenich and Moresnet-Chapelle. A war memorial nearby remembered Belgian soldiers who fell in the wars. A red and white striped barrier pole marked the Belgian-German border, while a signpost pointed travellers to the nearest German bar-restaurant, 2km away.

Seeing the place again after 33 years was nice. Although fairly quiet, with just a few visiting joggers, cyclists and walkers, it was clearly a popular spot still. My visit in 1976 had culminated in a climb up the wooden Wilhelmina viewing tower, a few hundred metres into the Netherlands and to the north of the more recently-built Belgian steel tower. I remembered feeling a small frisson of disappointment that the trees all looked the same – I’d expected all countries to look different. Perhaps it is as well that they don’t.

Neutral Moresnet was a separate territory between 1816 and 1920. It came into existence after the demise of the Napoleonic empire, and was sandwiched between the United Kingdom of the Netherlands and the Kingdom of Prussia. When in 1830 Belgium gained independence from the Netherlands, a four-border point came into being. The area was famous for a zinc spar mine and an experiment with Esperanto. Today it is part of Belgium, but the position of its borders are marked on the paved area around the present day Drielandenpunt. 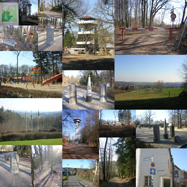