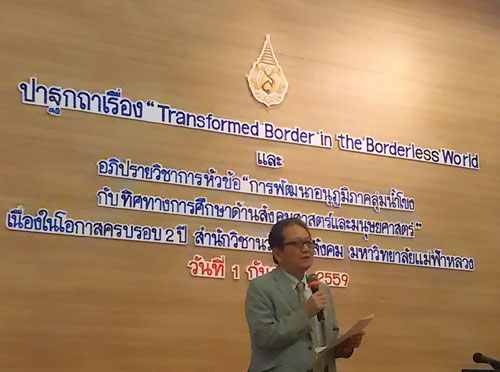 IBRU, Durham University’s Centre for Borders Research, has awarded its second annual Raymond Milefsky Award to Professor Akihiro Iwashita. Professor Iwashita is one of Japan’s leading boundary practitioners based at the Slavic-Eurasia Center at Hokkaido University.

Professor Iwashita has been a leading boundary practitioner and scholar of Asian borders, with expertise on the border between Russia and China as well as various disputes involving Japan. He has been a particularly strong advocate of sharing contested territories, either through division or through the establishment of joint management zones. His work in this area has influenced Japanese policy in ongoing disputes including Dokdo/Takeshima (with South Korea) and Sankaku/Diaoyutai (with China).

Alongside his commitment to practical work, Professor Iwashita has been an active scholar and author. He has published several books on the interface between cross-border politics and boundary delimitation, including New Geopolitics and the Rediscovery of the U.S.-Japan Alliance: Reshaping “Northeast Asia” beyond the Border (Brookings Institution, 2010) and Japan’s Border Issues: Pitfalls and Prospects (Routledge, 2016). Recent journal articles include “An Invitation to Japan’s Borderlands: At the Geopolitical Edge of the Eurasian Continent” (Journal of Borderland Studies, 2011) and “Inside and Outside Alliances: Russia’s Eastern Frontiers during the Cold War and After” (Journal of Borderland Studies, 2016).

Throughout his career, he has been committed to supporting the global border studies community, founding the Japan International Border Studies Network in 2011, organising the 12th Border Regions in Transition Conference (Fukuoka and Pusan, 2012), serving as President of the Association for Borderlands Studies (2015-2016), and organising the annual Hokkaido University Border Studies Summer School. He has also organised and led numerous tours of contested Asian border areas, laying foundations for dispute settlement and ongoing understanding.

As Sergei Golunov of the Russian Academy of Sciences noted in his nomination letter, Professor Iwashita’s work stands out because, in addition to promoting solutions to difficult border disputes, he has consistently promoted initiatives dedicating to bettering the lives of people in cross-border regions.

The Milefsky Award is made possible by a bequest from the estate of Raymond Milefsky, a long-time borders expert with the US Department of State who was a frequent tutor at IBRU training workshops. The award includes a cash prize of £745.

The Milefsky Award is made annually to an individual or organisation that has advanced boundary-making or cross-border cooperation. Nominations for the 2020 award will open in January 2020.