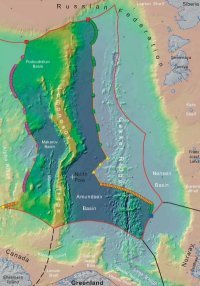 The executive summary of the submission, which was delivered on 15 December 2014, argues that the Lomonosov Ridge, which runs across the central Arctic Ocean, is “both morphologically and geologically an integral part of the Northern Continental Margin of Greenland”. On this basis, Denmark and Greenland have defined a continental shelf limit straddling the ridge which extends up to the outer limit of the Russian exclusive economic zone, more than a thousand nautical miles from the nearest point on the coastline of Greenland. The area of continental shelf beyond 200 nautical miles from Greenland’s baselines defined in the submission is around 895,000 square kilometres.

Russia’s 2001 submission to the CLCS indicated that the Lomonosov Ridge is also part of the Russian continental margin, but Russia chose not to extend its continental shelf beyond 90°N, presumably in anticipation of Danish and Canadian submissions along the ridge from the other end. Russia is expected to make a revised submission concerning its Arctic Ocean continental shelf in the spring of 2015, and it will be interesting to see whether it continues to limit its submission to 90°N, or whether it will follow Denmark in defining an outer limit that extends up to the EEZ limits of Denmark and Canada.

Whatever happens, continental shelf boundaries will need to be negotiated, and news media will continue to ask “who owns the North Pole?” for many years to come. The correct answer to that question is “nobody and everybody”. One or more States may ultimately have sovereign rights over the resources of the seabed at 90°N, but sovereign rights are not the same as sovereignty. Even when a State has sovereign rights over the seabed more than 200 nautical miles from its baseline, it has to contribute a percentage of the revenues from the exploitation of non-living resources in that seabed to the International Seabed Authority (which will distribute that contribution to the States Parties to the United Nations Convention on the Law of the Sea on the basis of equitable sharing criteria, taking into account the interests and needs of developing States, particularly the least developed and the land-locked). More significantly, the water and ice at the North Pole are, and will remain, part of the high seas, which are open to all States and are reserved for peaceful purposes – manufacturing and distributing gifts to the world’s children included.