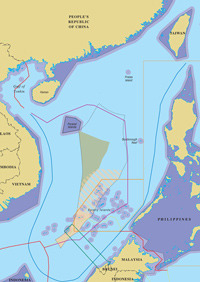 On 22 January 2013 the Philippines notified the People's Republic of China of its intention to submit elements of the two countries' disputes concerning sovereignty and maritime jurisdiction in the South China Sea to an arbitration tribunal established under the dispute resolution mechanisms of the 1982 United Nations Convention on the Law of the Sea (UNCLOS).

The Notification and Statement of Claim issued by the Philippines sets out the political and legal context for the move, noting that efforts to find a negotiated settlement to the dispute have been exhausted following seventeen years of fruitless discussions.

The Philippines' request to the arbitral tribunal is wide-ranging, asking for an award that:

The Notification notes that China has made a declaration under Article 298 of UNCLOS which excludes the application of  compulsory binding procedures for the settlement of certain types of dispute, including disputes relating to maritime boundary delimitations and those involving historic bays or titles. However, the Philippines argues that none of these exceptions is applicable to the Philippines' claims in this arbitration, suggesting that:

"The present dispute concerns (a) whether, in light of China's repeated assertions of alleged "sovereign rights and jurisdiction" within the so-called "nine dash line", the Parties' respective rights and obligations in regard to the waters, seabed and maritime features of the South China Sea are governed by the provisions of UNCLOS…; (b) whether China's Claims based on the "nine dash line" are inconsistent with those provisions; (c) whether, under Article 121 of UNCLOS, certain of the maritime features in the South China Sea are islands, low tide elevations or submerged banks, and whether they are capable of generating entitlements to maritime zones greater than 12M; and (d) whether China has violated the right of navigation of the Philippines in the waters of the South China Sea, and the rights of the Philippines in regard to the living and non-living resources within its exclusive economic zone and continental shelf."

At the time of writing China had not publicly responded to the Philippines' move. However, it has consistently rejected proposals for third-party adjudication of disputes in the South China Sea in the past and, despite the carefully-crafted wording of the Notification, it would be surprising if China did not contest the jurisdictional basis of the Philippines' case. Whatever happens next, the Philippines' move is a bold one. While it will not lead to a full resolution of the South China Sea imbroglio or even all the jurisdictional issues contested by the two countries - the Philippines has explicitly excluded questions of island sovereignty and the delimitation of maritime boundaries from the case - the request directly challenges China's longstanding claims over the waters of the South China Sea and forces China to decide whether to justify those claims before an international tribunal with binding authority.

Source: Statement by Secretary of Foreign Affairs Albert del Rosario on the UNCLOS Arbitral Proceedings against China to Achieve a Peaceful and Durable Solution to the Dispute in the West Philippine Sea, 22 January 2013 and Notification and Statement of Claim; http://bit.ly/140InSy.