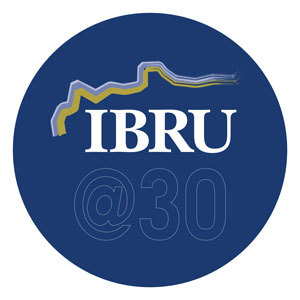 For three decades, IBRU has remained true to its central mission of sharing knowledge and building expertise to enable the peaceful management of boundaries and settlement of boundary disputes. However, its focus has shifted somewhat across the years as well. Here, IBRU’s history is recounted by Professor Phil Steinberg, with contributions from Professor Martin Pratt and Professor Gerald Blake, as a story of evolution and continuity in three eras.

1989 was a propitious year for international boundary studies. On the one hand, the break-up of the Soviet Union meant that new international boundaries were being established at a pace not seen since African and Asian decolonisation of the 1950s and 1960s. On the other hand, the fall of the Soviet bloc, combined with new technologies enabling the rapid, global movement of commodities, funds, and ideas was fostering predictions that the world map was about to change further, giving way to a borderless world. At the same time, advances in offshore drilling and fishing technologies and the codification of maritime zones in the recently negotiated United Nations Convention on the Law of the Sea gave a new urgency to maritime boundary delimitation. There were few, if any, academic institutions anywhere in the world specialising in international boundary studies, and Durham University’s International Boundaries Research Unit (IBRU) was formed to fill this gap.

IBRU was formally launched at Britain’s Royal Geographical Society in January 1989, as the brainchild of Jim Dening, publisher of Archive Editions, and Gerald Blake, Professor of Geography at Durham University. The two had collaborated previously in producing a 25-volume series of primary documents on Arabian boundaries, and Archive Editions provided an initial grant to get IBRU off the ground. Within a year, IBRU had compiled a database of 4,000 influential border scholars and managers, and in September 1989 it sponsored its first conference. From this point on, IBRU developed six areas of programming:

Conferences: Between 1989 and 2002, IBRU organised nine major, international conferences. Most attracted over 100 participants.

Training workshops: IBRU offered its first training workshop in 1996, as a one-day course attached to a conference. Shortly thereafter, IBRU adopted the format that continues to this day: three-day workshops on a specialised topic, such as maritime boundary delimitation, boundary negotiation and dispute resolution, river boundaries, border management, archival research, or the use of geographic information systems in boundary delimitation, where four to eight international experts in boundary law lead up to 35 participants (from government organisations, NGOs and boundary scholars) in lectures and practical exercises.

Publications: During this early period, IBRU developed several different publication streams. Six of the nine conferences resulted in edited volumes (three published by Kluwer and one as the five-volume Routledge World Boundaries compendium). IBRU also published 46 Briefings on specific international boundary disputes, as well as 36 issues of the quarterly Boundary and Security Bulletin. Although these series were discontinued in 2002, archived Briefings and items from the Boundary and Security Bulletins remain available on the IBRU website.

Research: IBRU began undertaking research just a year after its founding, with the receipt of a grant from the Leverhulme Trust to create a boundaries database that identified potential flashpoints around the world. Research has remained central to IBRU’s mission and at most points in its history IBRU has been supporting two or three ongoing research projects associated with boundary delimitation or border management.

Education: In 1997, IBRU brought together staff from Durham’s Department of Geography and Law School to offer a joint master’s degree in international boundaries. The degree programme was subsequently transferred to the Law School in 2001 and discontinued in 2005.

Consultancy: Already by the early 1990s, IBRU was engaging in consultancies for governmental, corporate, and third-sector clients, on a range of boundary delimitation topics. IBRU staff have frequently been involved in the preparation of written and oral pleadings by states in cases submitted to the International Court of Justice and arbitral tribunals.

The early 2000s saw a number of changes for IBRU. Gerald Blake retired in 2001 and leadership of IBRU passed on to Martin Pratt, who oversaw a number of changes in IBRU’s strategy. Training and consultancy became the foundation of IBRU’s activities, with the training workshop schedule increased to generally three per year.

Consultancy activity increased as well. IBRU staff acted as advisors to the United Nations Geographic Information Working Group and the African Union Border Programme, and served as mediators and technical experts in a range of land and maritime boundary disputes around the world. Field work was undertaken along remote and challenging boundaries such as Algeria-Libya, Cambodia-Thailand, and Guinea-Sierra Leone.

The publication programme saw significant changes as well. The conference proceedings and Briefings series were discontinued and the Boundary and Security Bulletin was replaced by the online Boundary News series as well as the annual Borderlines newsletter. Additionally, IBRU developed a new strand of publications: maps and databases connected to specific research projects. These included the Map of Maritime Jurisdiction and Boundaries in the Arctic Region (2008, with frequent updates since), the Map of UK and Argentine Claims in the South Atlantic and Southern Ocean (2010), and the International River Boundaries Database (2010).

This period also saw IBRU extend its remit beyond international boundary delimitation, as its staff and affiliated research began engaging in studies of migration, security, and border management.

In 2013, IBRU underwent a number of further changes. In recognition of IBRU’s growing research agenda beyond the core issue of international boundary delimitation, the International Boundaries Research Unit was relaunched as IBRU: Durham University’s Centre for Borders Research. To create stronger bonds between IBRU’s research activities and its training and consulting, Professor Philip Steinberg was appointed IBRU’s director and a new management board was established with staff from the Department of Geography and the Law School. Shortly thereafter, Martin Pratt left IBRU to start his own consulting firm, Bordermap Consulting Ltd.

Under Professor Steinberg’s leadership, IBRU has redoubled its research activities, sponsoring projects on topics ranging from the legal status of sea ice in the Arctic to migration management in Southeast Asia to conflicts over offshore oil and gas development in the eastern Mediterranean. At the same time, IBRU has continued performing consulting work, delivering bespoke trainings and producing bespoke mapping products for a range of governmental and non-governmental clients, while its library in Durham continues to host visiting scholars conducting their own research projects.

IBRU has also maintained its training workshops, in partnership with Bordermap Consulting. Increasingly these are delivered in collaboration with legal, commercial, and university partners from around the world. To date, IBRU has offered over 60 workshops, training over 1,600 participants from over 120 countries. The workshop programme for 2020 is announced at the end of this newsletter.

When IBRU was formed in 1989, some scholars were predicting a continual proliferation of new borders whilst others were heralding their imminent disappearance. In retrospect, both predictions were unwarranted. Borders are here to stay, but their locations and functions are continually changing. We fully expect that professional, scholarly knowledge of border issues will be as necessary in 2050 as it is 2020, and we hope that in another 30 years IBRU will be there, still, to meet this need.