DELI hosts an annual public lecture by a prominent figure in the field of European Law.

Professor Catherine Barnard, Trinity College, University of Cambridge, '(E)U, a Little Bit of Me, and Brexit'

Sir Jonathan Faull KCMG, King's College London, formerly European Commission, 'Britain and Europe: How We Got Here and Where We Go Next'

Judge Sacha Prechal, Court of Justice of the European Union, 'Mutual trust and the Area of Freedom Security and Justice'

Professor Sir Alan Dashwood, 'Ending a Bad Marriage With a Messy Divorce - Is This the Future of the UK's Relationship With the European Union?'

Professor Miguel Poiares Maduro, European University Institute, former Advocate General of the European Court of Justice, 'The Euro Crisis and Europe's Identity: Building a Theory of Democracy and Justice for the EU'

John Temple Lang LL.D., Director in the Directorate General for Competition of the European Commission, Brussels, 'The Duties of National Authorities under Community Constitutional Law' 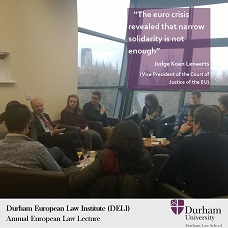