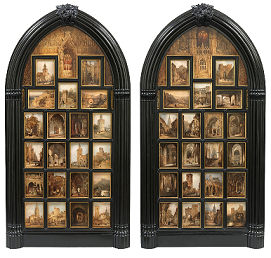 Canons and Repertoires: Constructing the Visual Arts in the Hispanic World

The visual arts in Spain have long been haunted by the spectres of six giants: El Greco, Ribera, Velázquez, Murillo, Goya and Picasso. Still today, these canonical figures tower over all others and continue to shape the story of Spanish art, which has been traditionally told in monographic form. Although the strength of the Spanish canon has informed different disciplines (literature, aesthetics, performing arts), given the recent ‘material turn’, the prosopographical dimension of the visual arts in Spain poses a disciplinary challenge. Similarly, following the ‘global turn’, the visual arts of Iberia pose a geographical challenge, intersecting with the Mediterranean, Arabic, Latin American, British and continental European worlds. The notions of ‘Spain’ and ‘Spanish art’, therefore, are necessarily nebulous and problematic, raising a host of questions: To what extent does Spanish art exist before the establishment of Spain as a nation state? To what extent is the art of the Habsburg and Bourbon empires a Spanish art outside Spain? What is the role of Spain in the wider canon of European art? Who has exploited the visual arts of the Hispanic world, geographically, politically and intellectually? These questions ultimately point to a tension between canons and repertoires; between centres and peripheries; and between consolidating the ‘core’ and expanding the ‘remit’ of the so-called Spanish school.

This conference will explode the disciplinary, material and geographical limits of Spanish art, inaugurating the Zurbarán Centre as a critical and innovative research institution for the study of Spanish and Latin American art in the twenty-first century. Papers will challenge the canonical construction of Spanish art, which can be traced back to writings from Palomino’s Lives of the Eminent Spanish Painters and Sculptors (1724) to Stirling Maxwell’s Annals of the Artists of Spain (1848), to more recent publications by scholars in the field. Papers will also probe the chronological, geographical and material boundaries of the ‘El Greco to Goya’ survey, interrogating the ways in which academics, curators, scholars and teachers narrate this material through various platforms, including publications, museum displays, exhibitions, lectures, gallery talks and academic courses. Speakers will address the various ‘terrains’ of Spanish art, from geographical constructions of Iberia as Europe’s frontier or edge, to exchange with all that lies beyond the Pillars of Hercules.

A full programme is available here.