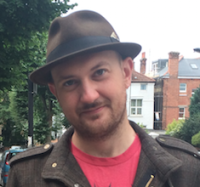 Michael graduated from St Hugh’s College, Oxford with a first in English Language and Literature. He then took an MA in Advanced Theatre Practice at Central School of Speech and Drama and an MSc (with distinction) in Medical Humanities at King’s College. His PhD is in the semiotics of schizophrenia, and he has nearly 10 years experience in marketing semiotics.

Michael has given several conference papers, including one earlier in 2014 at the Narrative Matters conference organized by the American University of Paris. He has helped organize workshops at the Leeds Centre for Medical Humanities, and oversees their blog.

His PhD research includes a close reading of illness memoirs by people with a diagnosis of schizophrenia, analyzing these in conjunction with medical theory and literature relating to schizophrenia, and with materials gathered through his own fieldwork with NHS and non-NHS service-users in Leeds.

Michael has also written several pieces for theatre, including plays for children and adults, operas and comedy shows. He runs a small theatre company, and is currently working on a one-man show about psychosis, which he performed at the Brighton Fringe in 2012 and 2013.