Centre for the Ethics of Cultural Heritage

A research project of the Department of Archaeology, part of the Heritage Partnerships Research and Impact Group

Jaffna’s damaged cultural heritage has recently become a focus in efforts to address national reconciliation, renewal and peacebuilding through tourism and its associated economic impacts and benefits (Pushparatnam 2014). Recent conservation-related work within Jaffna’s Dutch Fort has focussed on its massive ramparts, but also included the digging of foundations for a new septic tank. Professor Pushparatnam of the University of Jaffna, reported that Rouletted Ware (200BCE–200CE) as well as Medieval Islamic and Chinese ceramics had been recovered.

These artefacts hinted at the antiquity and depth of cultural occupation within Jaffna Fort, yet the early archaeological sequences of Jaffna, and Northern Sri Lanka, are less well understood than other parts of the island. There has been a general lacuna of published scientifically-dated stratigraphic sequences relating to pre-colonial heritage in Northern Sri Lanka, forcing a bias towards the use of textual sources for reconstructing the region’s past.

In response, this project aims to map and characterise the surface and subsurface heritage of Jaffna Fort, and environs, for enhanced protection; excavate high-resolution scientifically dated artefactual and architectural sequences for the currently neglected pre-colonial heritage of Jaffna; Pilot-Post-Disaster archaeological methods; and Understand visitor experience at Jaffna and develop information for tourists.

Building on our post-earthquake research in Nepal’s Kathmandu Valley, we utilised a similar methodology to clear and excavate the ruins of the eighteenth century Dutch Kruys Kerk, which had been damaged during the recent conflict. Laying out a grid, cultural debris was removed from each square and placed within a replicated grid away from the rubble spread. This allowed for rapid removal of material, with spatial control, onto intact floor surfaces and walls. Identifying and recording artefacts provided a biography of the monument as well as the salvaging of original non-renewable materials, including eighteenth century Dutch bricks and coral blocks, which are illegal to procure under national and international legislation.

GPR survey outside Jaffna Fort opposite the Magistrates’ Court, identified a large structure located below the ground surface. Its size and morphology suggest that this may be the remains of a large Portuguese period church or cathedral. GPR, UAV and auger core survey on Delft Island (Neduntheevu), off the west coast of the Jaffna Peninsula also identified previously unknown substantial structures within the environs of the Fort, as well as the depth and spread of cultural material around the monument.

Based on our findings, we co-designed a tri-lingual exhibition inside the Fort to provide visitors and local communities with more information about its history and role. It was opened in 2018 with a Heritage Festival to promote and protect the intangible and tangible heritage of the Jaffna Peninsula, particularly showcasing local crafts, cuisine and dance.

The fieldwork has identified areas of subsurface heritage within Jaffna Fort and its environs, as well as within Delft Fort, that requires enhanced protection. Archaeological Risk Maps are being co-developed with site managers to guide sustainable development by indicating areas of subsurface heritage at risk from destruction through intrusive digging for foundations and infrastructure.

A ceramic identification field handbook was co-developed and piloted for use by junior officers of the Central Cultural Fund and students from the University of Jaffna as part of training in artefact processing. Hard copies were deposited with the Central Cultural Fund (Government of Sri Lanka), University of Jaffna and Department of Archaeology (Government of Sri Lanka) to aid further training.

Surveys of visitors to the Fort were undertaken to establish benchmarks for the social and economic impacts of heritage sites on local communities, particularly identifying whether there was a market to promote local handicrafts. Understanding visitor engagement with Jaffna Fort and cultural heritage in northern Sri Lanka is critical, as in the words of Professor Pushparatnam "To promote cultural tourism in Northern Sri Lanka, we have to make a positive approach to popularize the cultural heritage symbols and monuments of this region, such as its ancient history and relevant historical sites and monuments. It will not only preserve the heritage symbols and promote cultural tourism, but also earn a lot of valuable foreign-exchange" (2014: 10).

Since the completion of our project, the temporary exhibition inside the Fort has become a permanent display, providing tourist and local communities with information of the site’s past from its origins through to colonial legacy. New tri-lingual information boards were co-designed and installed around Jaffna Fort, complementing new co-produced information pamphlets with suggested visitor routes through the site. Data from our survey, including information on visitors’ ‘willingness to pay’ has informed the development of ticketing at the site to raise funds for Jaffna Fort’s continued conservation and maintenance. 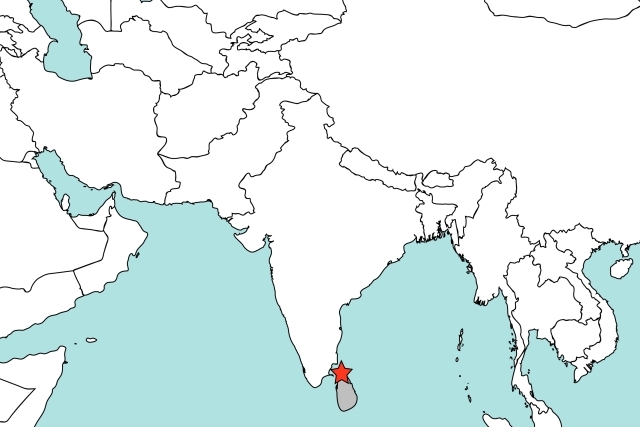 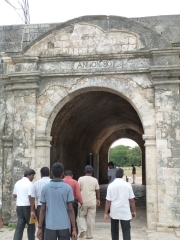 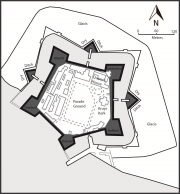 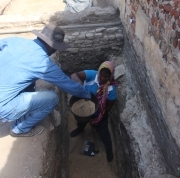 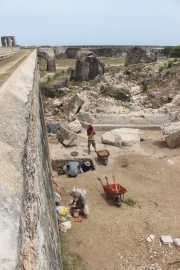 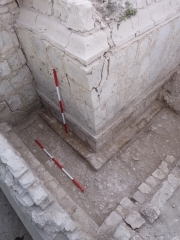 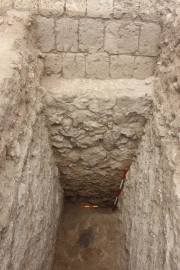