Centre for the Ethics of Cultural Heritage 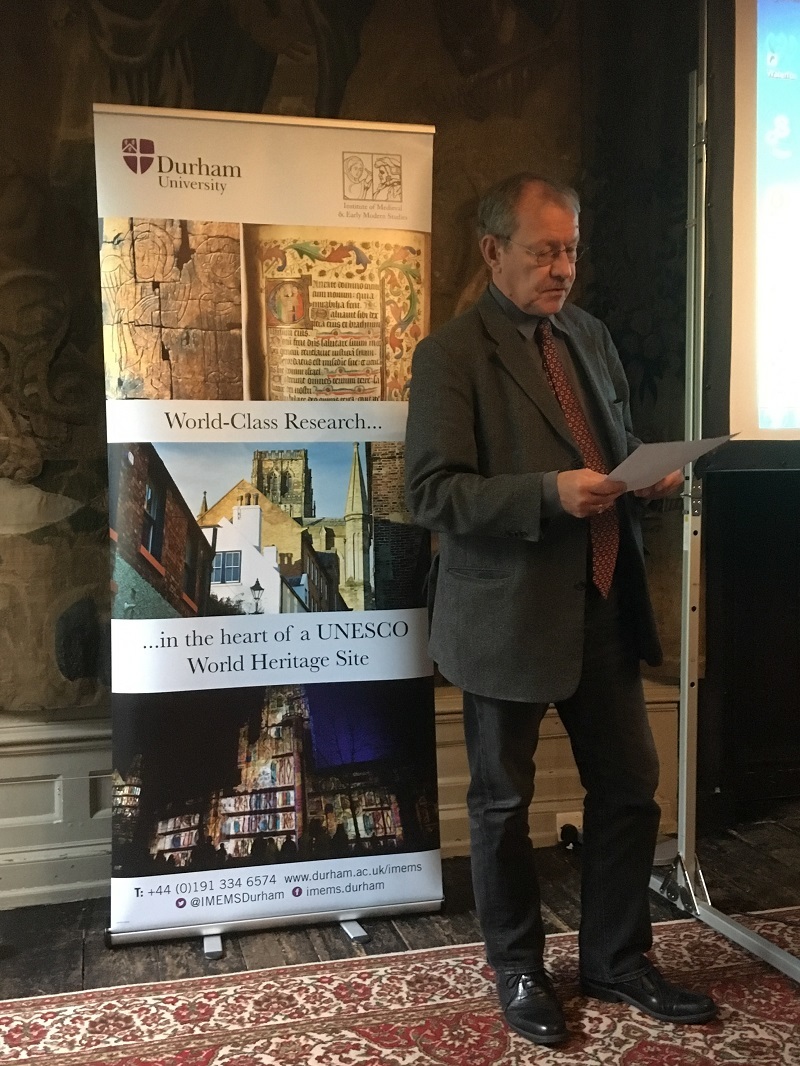 Durham’s 2019 World Heritage Site Lecture was presented by Professor Dr Friedrich Lüth, Director for Cultural Heritage at the Deutsches Archäologisches Institut, on the 6 May 2019. Sponsored by the Institute of Medieval and Early Modern Studiesand Durham’s UNESCO Chair on Archaeological Ethics and Practice in Cultural Heritage, Professor Lüth debated the challenge of protecting and preserving vulnerable archaeological remains for future generations, whilst also utilising these finite resources for sustainable tourism developments. 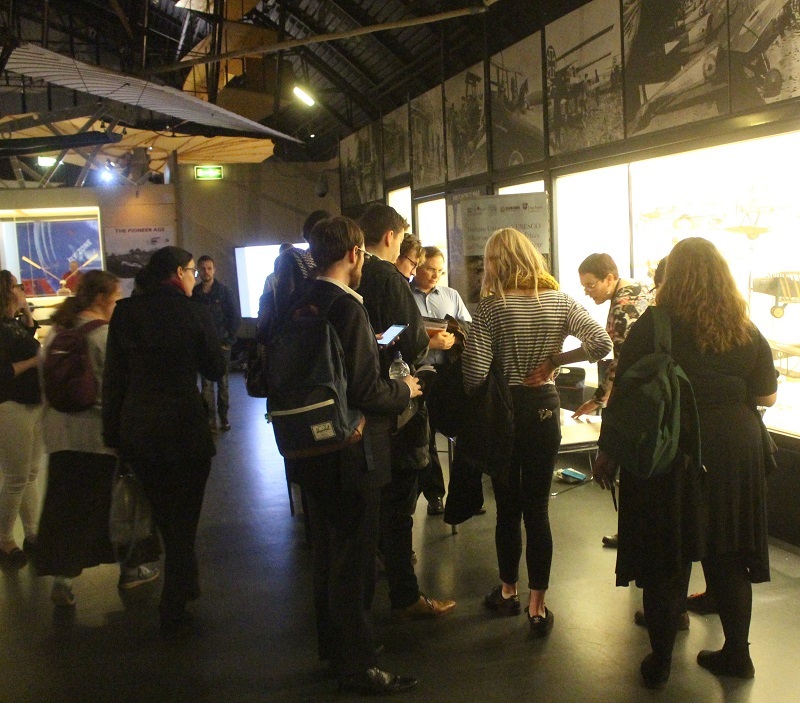 On the 27 March, the UK National Commission for UNESCO partnered with the Science Museum in London as part of the popular Science Museum Lates programme. This event showcased scientific research and innovations that are developing world-leading science and technology that contributes to UNESCOs mission of building peace and tackling major global challenges to aid the UNs sustainable development goals. As part of the event, Prof Robin Coningham and Dr Christopher Davis of Durham UNESCO’s Chair were joined by Dr Kamal Badreshany (Department of Archaeology and Durham Archaeomaterials Research Centre), Prof Andrew Beeby (Department of Chemistry) and Mrs Rachel Barclay (Oriental Museum) to publically demonstrate the innovative scientific and archaeological techniques that are recording, protecting and preserving heritage across South Asia and globally. 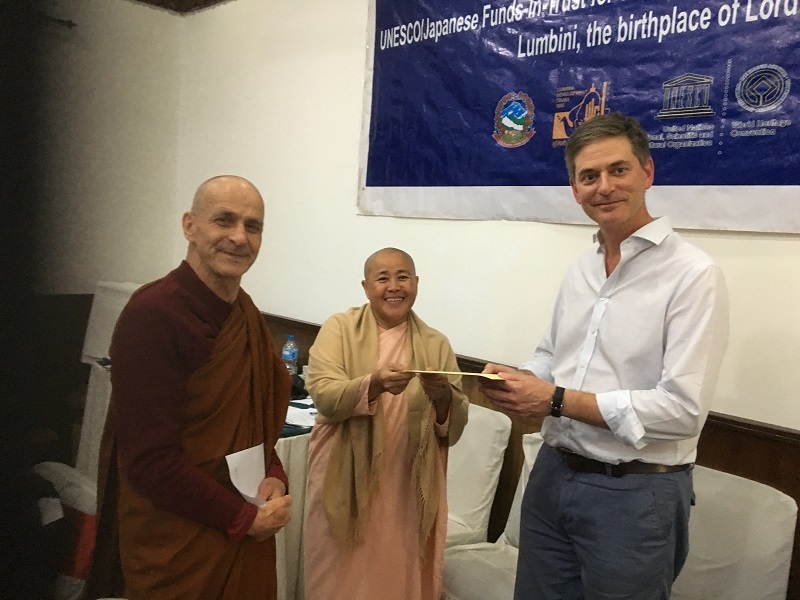 As significant stakeholders in the preservation of the intangible values of Lumbini and the Greater Lumbini Area, Venerable Vivekananda and Venerable Sayalay Daw Bhaddamanika have been closely involved in the co-design and co-production of the Government of Nepal and Japanese-Funds-in-Trust-for-UNESCO-sponsored project 'Strengthening Conservation and Management of Lumbini, the Birthplace of the Lord Buddha, World Heritage Property” and its three phases in Lumbini and Tilaurakot since 2010. 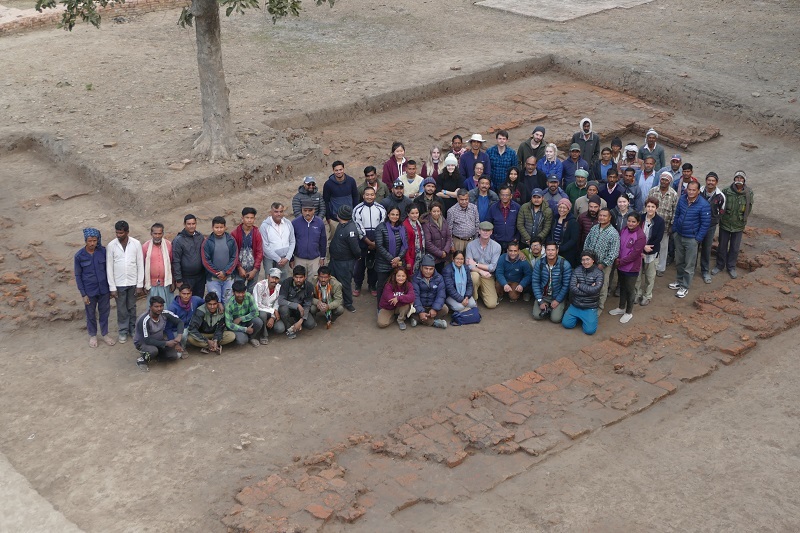 In January 2019, Durham’s UNESCO Chair, the Department of Archaeology (Government of Nepal) and Lumbini Development Trust, alongside international partners from the University of Stirling, University of La Trobe and Maharaja Sayajirao University of Baroda, began the first field season of its activities as part of Phase III of the Japanese-Funds-In-Trust-for-UNESCO sponsored fieldwork at Tilaurakot-Kapilavastu.

International Workshop - 'Towards the Seismic Safety of kathmandu's Historic Infrastructure' 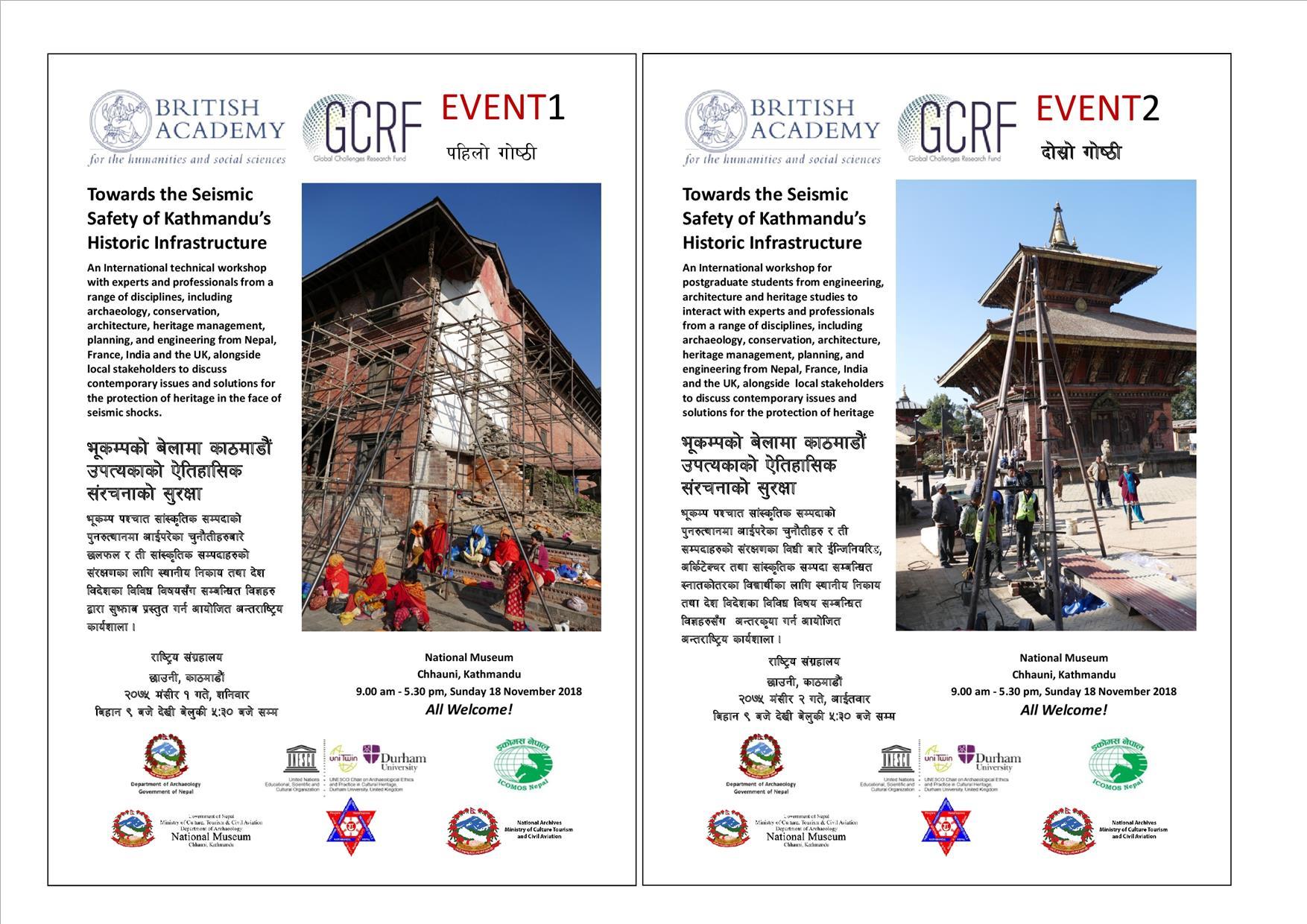 After the earthquake: Research, protection and preservation of Nepal’s cultural heritage

The interdisciplinary ‘Scientific Study of Manuscripts’ theme was initiated by IMEMS to bring colleagues from across Durham and beyond to showcase and exchange approaches for exploring medieval manuscripts and their associated material culture. The group held its second meeting on the 30 October 2018, with speakers from outside Durham providing insights into their expertise and experiences with medieval manuscripts.

On the 31 October, IMEMS supported the follow on meeting of a smaller group of Durham academics, including the Durham UNESCO Chair, to co-design a network with Saubhaghya Pradhananga, Director of the National Archives, Government of Nepal); Kai Weise President ICOMOS (Nepal); and Dr Nina Mirnig IKGA, Austrian Academy of Sciences, to develop potential avenues of collaboration and capacity strengthening for the protection, conservation and study of inscriptions and textual sources in Nepal. 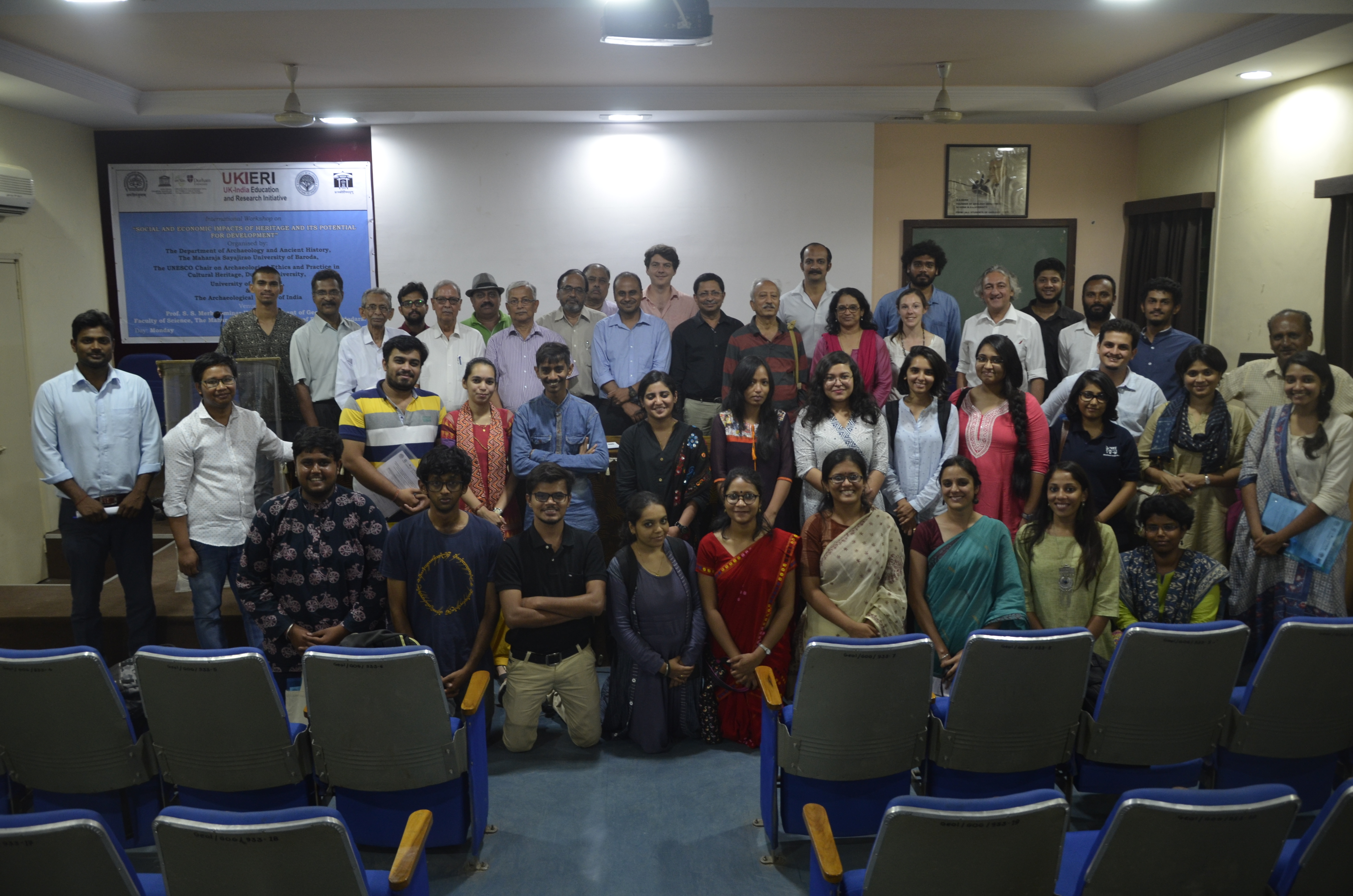 On the 21st May 2018, an International Workshop as of the UCG-UKIERI Joint Research Programme, “Promoting Sustainable Pilgrimage and protection of Heritage sites in Gujarat and Uttar Pradesh, India” was held at the Maharaja Sayajirao University of Baroda. Co-organised between the Maharaja Sayajirao University of Baroda, University of Allahabad and the UNESCO Chair on Archaeological Ethics and Practice in Cultural Heritage, Durham University, the theme of the International Workshop was “Social and Economic Impacts of Heritage and its Potential for Development”.

The Department of Archaeology of Nepal, and UNESCO signed an agreement, in the presence of Japanese Embassy, on 23 March 2018 to implement the third phase of the three-year project, titled “Strengthening conservation and management of Lumbini, the birthplace of Lord Buddha, World Heritage property" funded by the Government of Japan.

Excavations at Tilaurakot end with our inaugural Heritage Festival

The 2018 field season at tilaurakot came to a close at the end of February with the hosting of our first ever Heritage Festival.  The day long festival started at 10am in the morning and finished at 4.30pm with a public debriefing meeting which also officially concluded the field season. 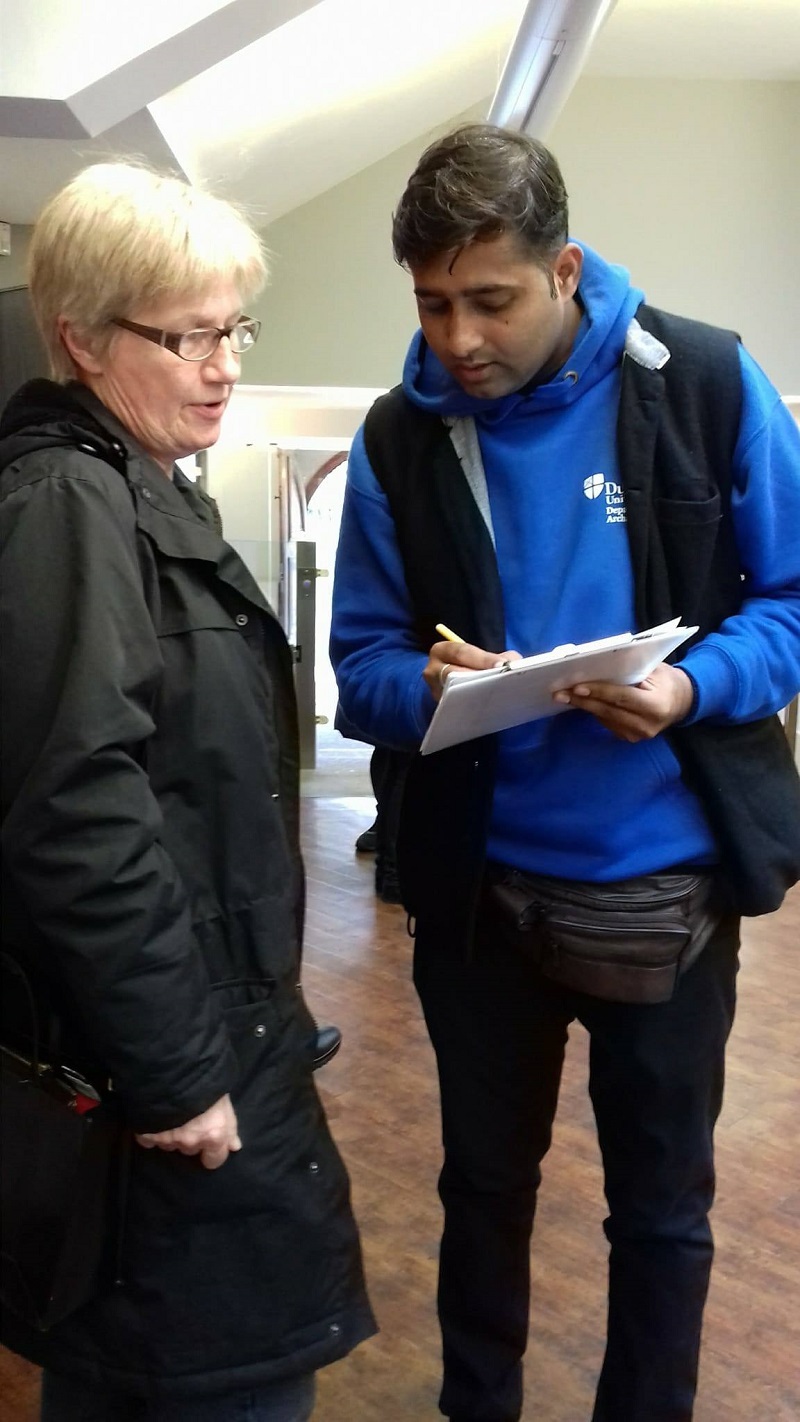 For the last two weeks we have been joined by Amit Singh, an undergraduate student from the University of Allahabad. He has been working with undergraduates from Durham University interviewing visitors to Durham Castle about the reasons behind their visit, and their economic spend in the area. This work mirrors that which we have been doing in India to Promote Sustainable Pilgrimage and Protect Heritage, as part of a broader program to benchmark the social and economic impacts of heritage in the region. The work here in Durham will be supplemented by similar visitor interviews at the World Heritage Site of Champaner-Pavagadh in Gujarat and at Sarnath in Uttar Pradesh. 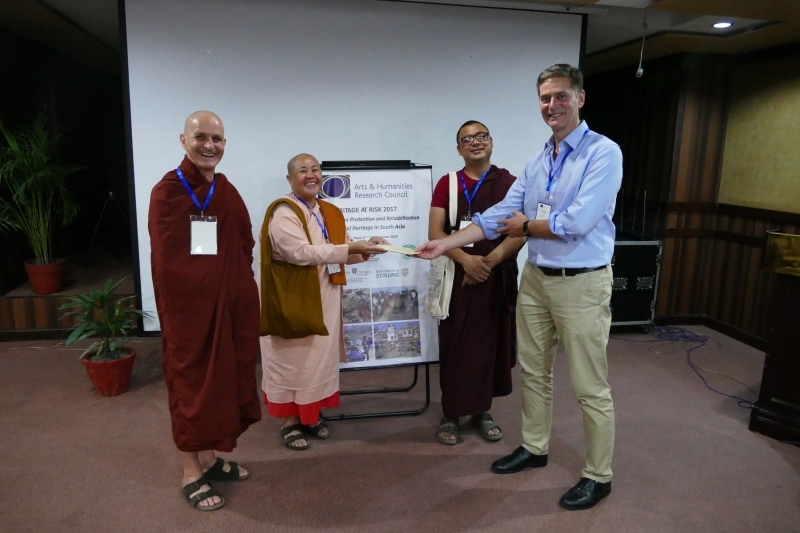 During the recent AHRC-GCRF-sponsored 'Heritage at Risk 2017: Pathways to the Protection and Rehabilitation of Cultural Heritage in South Asia ' Workshop in Kathmandu with partners Department of Archaeology (Government of Nepal), UNESCO (Kathmandu) and ICOMOS (Nepal), we benefitted from presentations from an extremely diverse range of heritage stakeholders from across South Asia. These included presentations from two members of the Panditarama Lumbini International Vipassana Meditation Centre in Lumbini's Sacred Garden. Venerable Vivekananda on the topic 'Environmental Issues and Protection in Lumbini' and Venerable Sayalay Daw Bhaddamanika on 'Pathways to the Protection of Sacred Heritage'. 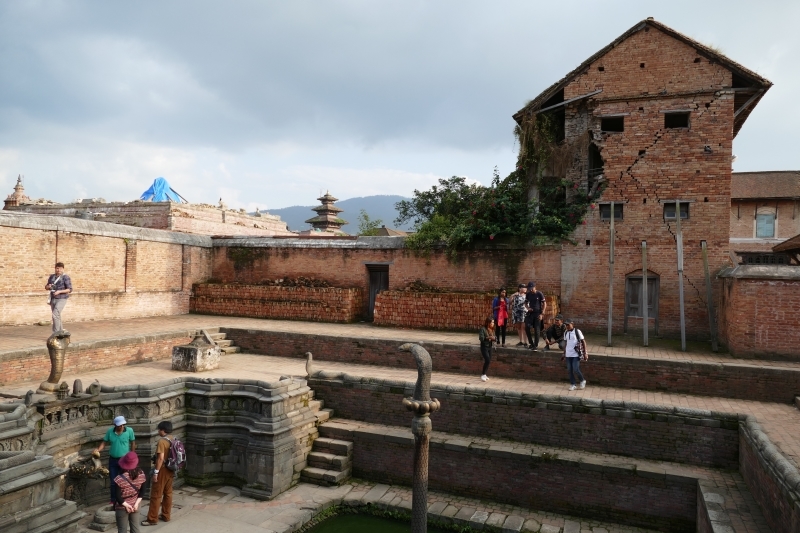 The British Academy has announced the successful applicants to its new Cities & Infrastructure research funding programme. The programme is part of the £1.5 billion Global Challenges Research Fund and is being delivered by the British Academy on behalf of all the national academies. Altogether, the Academy will support thirteen interdisciplinary research projects, with awards of up to £300,000 each. One of these awards has gone to the UNESCO Chair in Archaeological Ethics and Practice in Cultural Heritage for Reducing Disaster Risk to Life and Livelihoods by Evaluating the Seismic Safety of Kathmandu's Historic Urban Infrastructure.

'Sketches of Nipal: A brief outline of the European ‘discovery’ of Nepal' by Charles Allen

Charles Allen, author of Plain Tales from the Raj: images of British India in the twentieth century (1975), The Buddha and Dr Fuhrer: an archaeological scandal (2008) and The Prisoner of Kathmandu: Brian Hodgson in Nepal 1820-1823 (2015), summarises the political, scholarly and archaeological background to the AHRC-GCRF exhibition ‘Resilience within the Rubble: reconstructing the Kasthamandap and its past after the 2015 Nepal earthquake’.

Resilience within the Rubble: a photographic exhibition 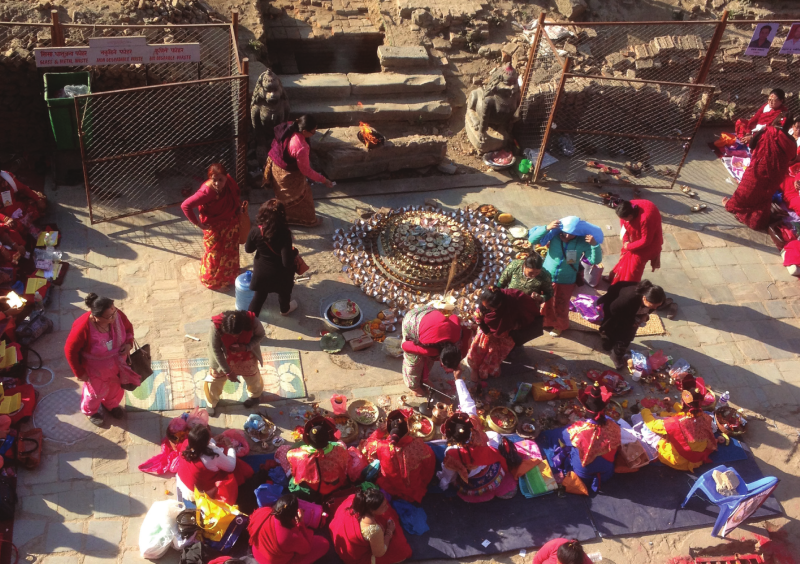 As part of the new UKIERI-UGC project Promoting Sustainable Pilgrimage and the Protection of Heritage Sites in Gujarat and Uttar Pradesh, India two students from MSU Baroda joined the Durham team excavated at Nevern Castle. 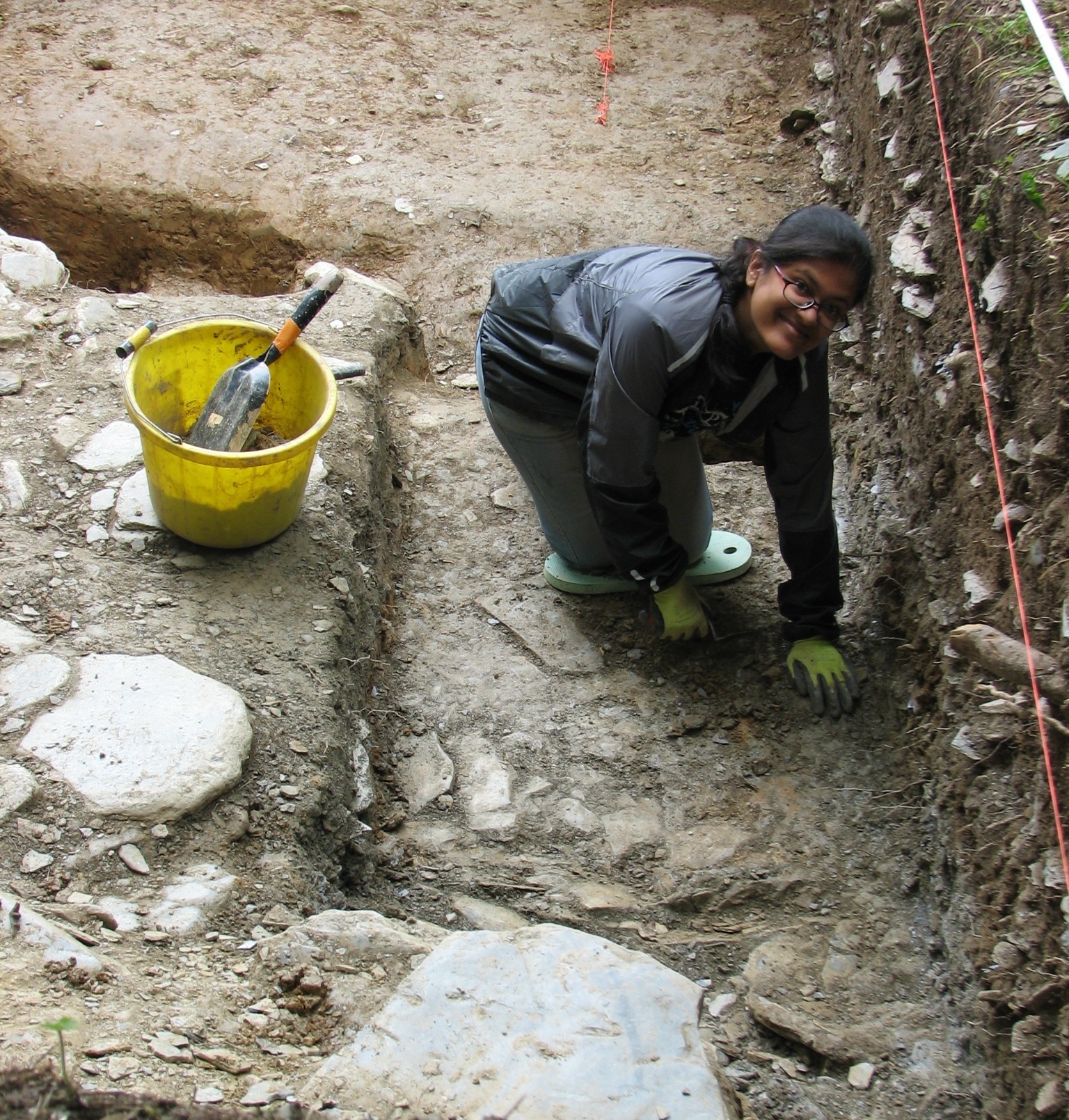 The pilot season of fieldwork at Jaffna Fort in northern Sri Lanka began in late June. Supported by a British Academy Small Grant, the project aims to provide scientifically dated sequences for the site, which can then be linked to artefactual typologies from published site reports in Sri Lanka and the Indian Ocean region. 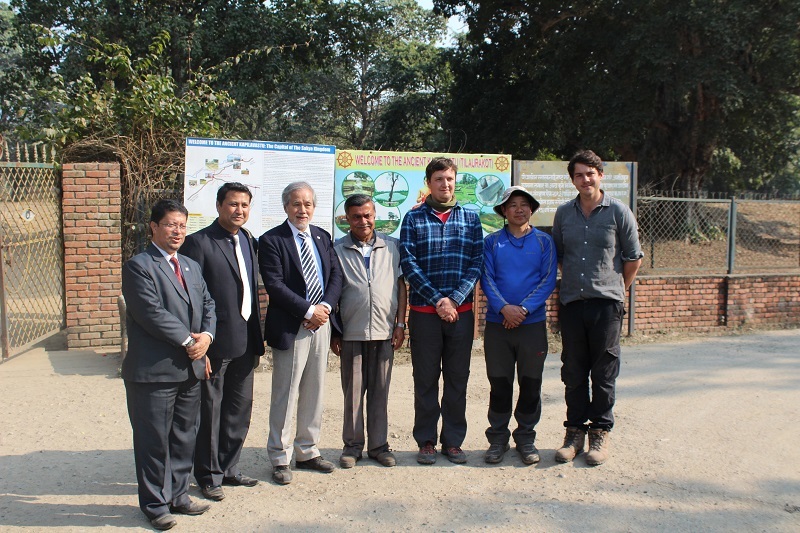 The UNESCO Chair in Archaeological Ethics and Practice in Archaeology receives Donation of 20 million Yen from Mr Tokushin Kasai to continue research on sites associated with the life of the Buddha.

(5 May 2017) » More about Kasai donation to Durham University 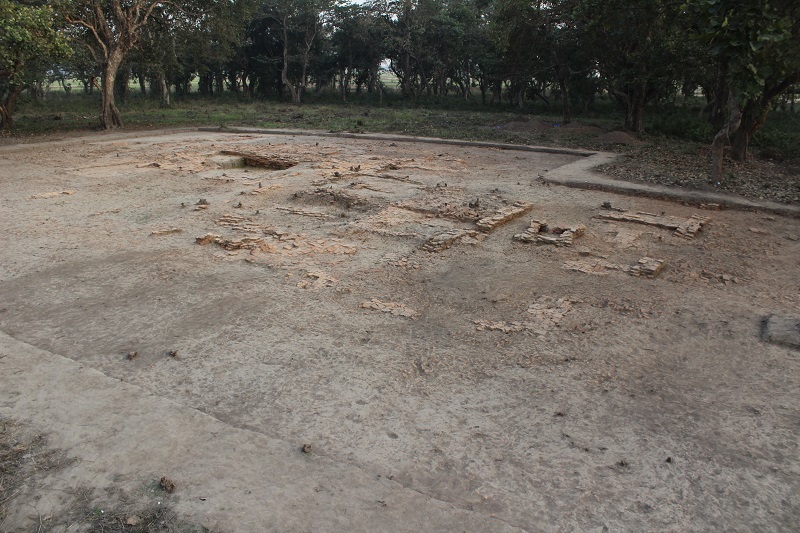 The fourth season of UNESCO-coordinated fieldwork at Tilaurakot came to a close in March. 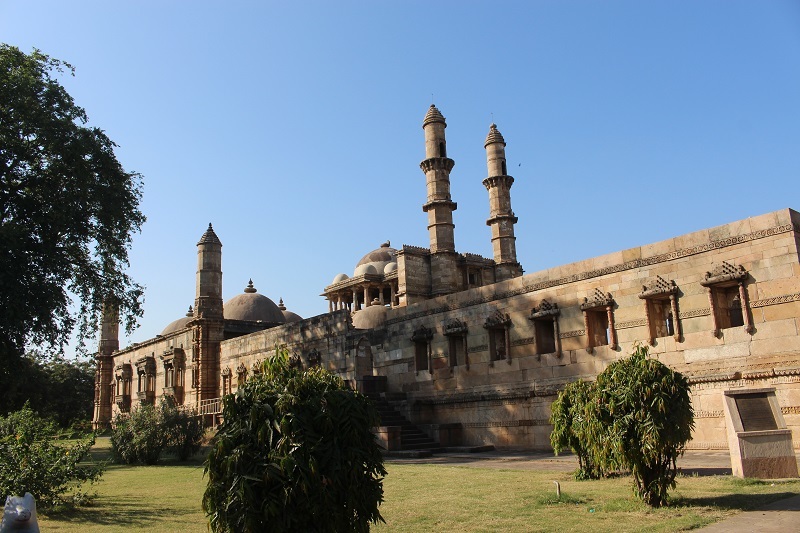 Durham’s UNESCO Chair and the Maharaja Sayajirao University of Baroda have been awarded £117,298 by UGC-UKIERI for a three year collaborative program of research.

The UNESCO Chair team and their collaborators are underway in Kathmandu. The work focuses on post-earthquake research and rescue excavations at Kasthmandap and other temples in the city. You can follow the progress of the team on the blog, as well as on twitter and instagram

Second phase of work begins at Kasthamandap in Kathmandu

The UNESCO Chair has started it's second phase of post-earthquake rescue and research work in the Kathamndu Valley, focusing on the Kasthamandap temple in Hanuman Dhoka Durbar Square. Prof Coningham and Dr Davis, along with colleagues from elsewhere in Durham, Stirling, Vienna and La Trobe are working alongside the Department of Archaeology, UNESCO and local government agencies. the work is sponsored by the Arts and Humanties Research Council and National Geographic. Read the full press release below.

In July 2016 the UNESCO Chair team from Durham worked alongisde the Central Cultural Fund in continued excavations at the World Hertiage Site of Polonnaruva. Joined by colleagues from the Department of Archaeology (Govt of Nepal), LaTrobe University, the Maharaja Sayajirao University of Baroda and the University of Stirling, the project continued its excavations of Siva Devale No. 2, opened a new trench across the citadel fortification wall and conducted further hinterland field survey to identify new sites in the landscape. 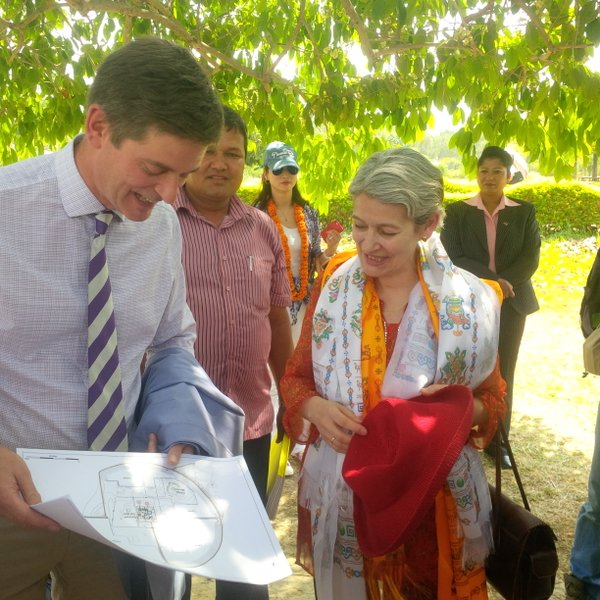 Robin Coningham has been in Nepal for the last week as part of the visit of Irina Bokova (the Director-General of UNESCO) to key heritage sites in Nepal. Ms Bokova visited both Lumbini, recognised as the birthplace of the Buddha, where the UNESCO Chair team worked from 2011 to 2014. Prof Coningham personally gave a tour of the site to Ms Bokova, showcasing the work conducted at the site by Durham University, the Lumbini Development Trust and the Department of Archaeology (Govt of Nepal).

Nepal Earthquakes: One Year On

For the past year, archaeologists from Durham University have been working with local counterparts to map and evaluate the damage caused by the 2015 earthquakes to UNESCO World Heritage Sites in Nepal. Led by Professor Robin Coningham, who holds Durham’s UNESCO Chair in Archaeological Ethics and Practice in Cultural Heritage, the team applied a multidisciplinary study of Kathmandu’s Hanumandhoka, Bhaktapur and Patan Durbar Squares using geophysics, excavation and geoarchaeology.

UNESCO sponsored a multidisciplinary team, to undertake a rescue archaeology mission prior to reconstruction, between 5 October and 22 November 2015, targeting various monument zones across the Kathmandu Valley World Heritage property. The mission illustrated the role that archaeology can play in guiding post-disaster responses to reconstruction and rehabilitation of earthquake damaged heritage. 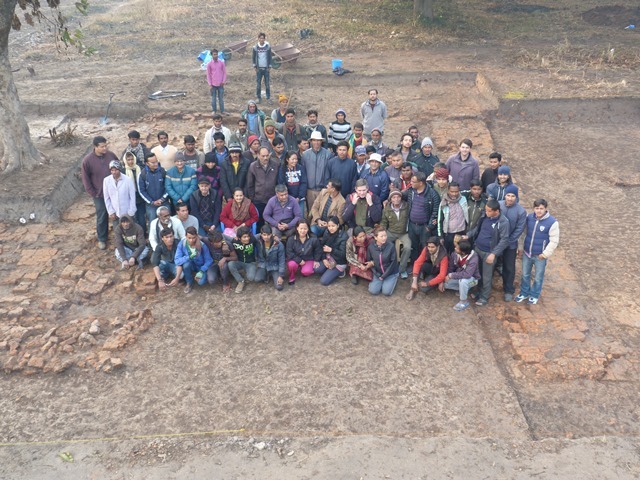 The UNESCO Chair team have jetted off to Nepal for the fifth season of fieldwork at Tilaurakot (the childhood home of the Buddha), and the third season of field activities at Pashupati in Kathmandu. 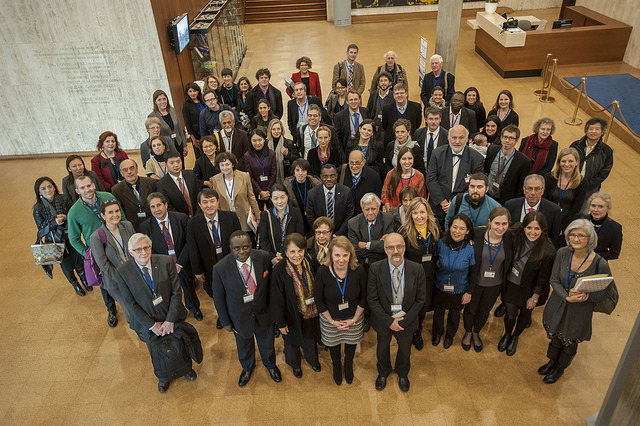 The Nepal Earthquakes: research and rescue excavations at the UNESCO World Heritage properties of Kathmandu

A new exhibition will be held at the Durham World Hertiage Site Visitor Centre from the 2nd November until the 27th November 2015, which outlines the work Durham and the UNESCO Chair has been involved with, and some of the philosophical debates that are emerging from within it.

(1 Nov 2015) » More about New Exhibition on the Nepal Earthquakes 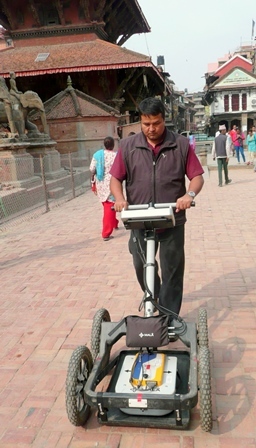 A collaborative team of international and national experts from the Department of Archaeology, Government of Nepal and Durham University, has started a series of post-excavation surveys and rescue excavations at earthquake-damaged UNESCO World Heritage Site of the Kathmandu Valley, Nepal. 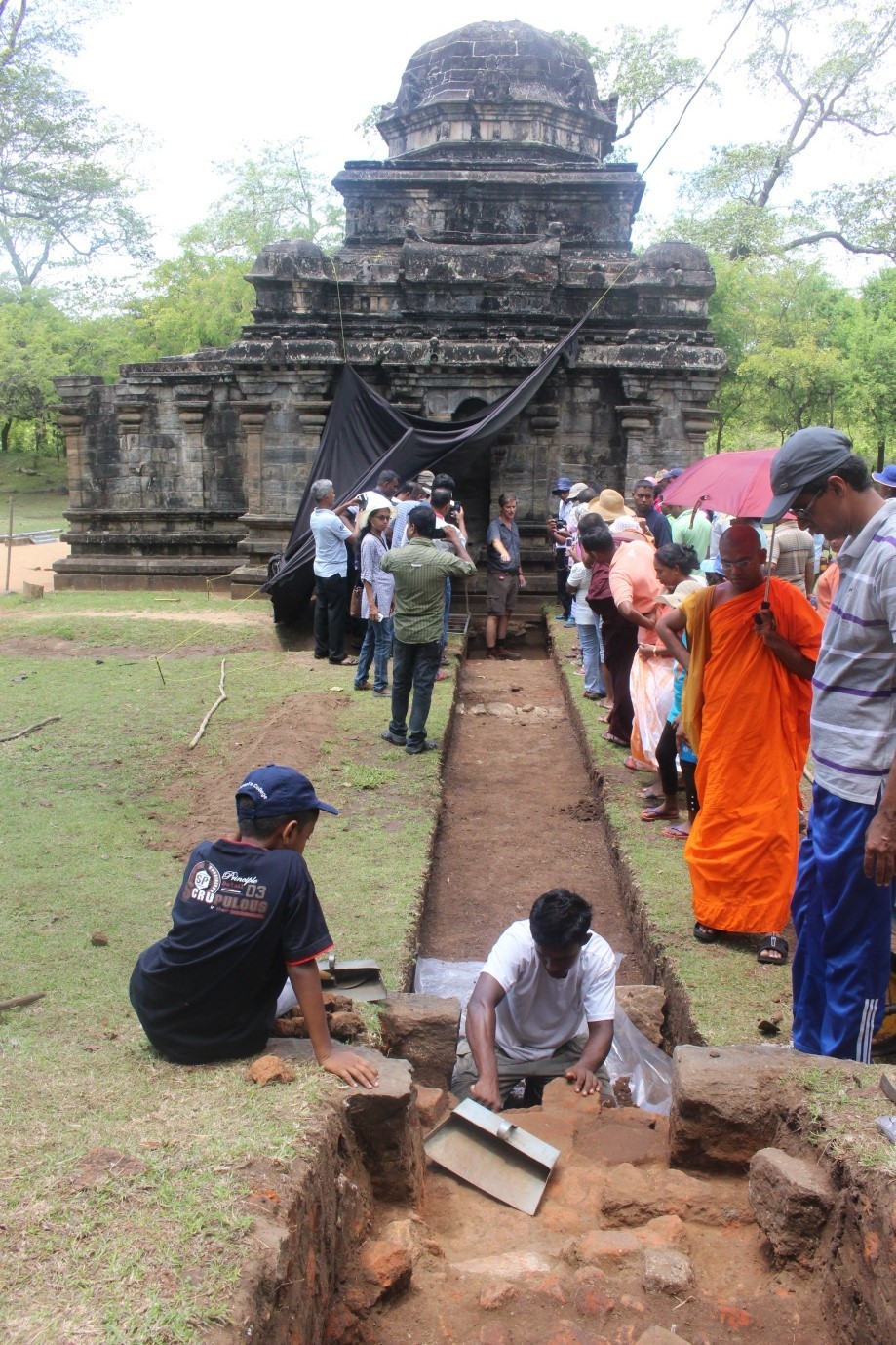 A new archaeological field project has begun at Polonnaruva, the ancient capital of Sri Lanka from AD1017-1293 and a UNESCO World Heritage Site. The projects aims to conduct archaeological excavations in the urban core whilst simultaneously undertaking an intensive systematic survey of sites within the city's hinterland. The pilot season of fieldwork ran from the 26th August to the 18th September 2015, supported by a British Academy Small Grants award of £10,000.