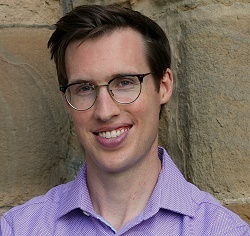 Assistant Professor (Modern American History) in the Department of History

Kevin Waite is a political historian of the 19th-century United States with a focus on slavery, imperialism, and the American West. His first book, West of Slavery: The Southern Dream of a Transcontinental Empire (UNC Press, 2021), is a study of slaveholding expansion in California and the Far Southwest. It explores how American Southerners extended their labour order and political vision across the continent, and in the process, triggered a series of conflicts that culminated in the Civil War.

His next book project reconstructs the life and times of Biddy Mason, an enslaved woman from Georgia who, in the mid-19th century, walked across the continent, broke free from bondage, and helped build modern Los Angeles. That work is funded by a Collaborative Research Grant from the National Endowment for the Humanities, which he co-directs with Prof. Sarah Barringer Gordon (University of Pennsylvania). Their project website is live at biddymasoncollaborative.com. Alongside several other academics and activists, Kevin is coordinating a campaign to preserve an endangered series of 1930s murals by the artist Bernard Zakheim, one of which features Biddy Mason. Their efforts have generated extensive media coverage, including stories in The Los Angeles Times, The New York Times, and National Public Radio.

Kevin comments frequently on American history and politics for major media outlets. His writing has appeared in The Atlantic, National Geographic, The Los Angeles Times, HuffPost, Slate, The New Republic, TIME, and The Washington Post, among others. One of those articles for the LA Times led to the removal of the oldest Confederate monument on the Pacific Coast. He has also spoken about his research on television and radio, including interviews with LBC, LBC News, BBC Radio 3, Metro Radio, NPR, and as a talking head for television documentaries on Channel 5 and the Yesterday Channel. He currently sits on Mayor Eric Garcetti’s Steering Committee for the creation of a memorial to the victims of the 1871 Los Angeles Chinese Massacre, one of the largest mass lynchings in American history. For links to his articles, media appearances, and c.v., click here.

Kevin welcomes inquiries from prospective students working on a broad range of topics in U.S. history, especially those interested in the American Civil War era, the history of slavery and emancipation, and the American West.