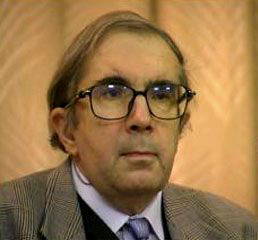 Sergei Sergeevich Averintsev (1937–2004) was a distinguished Russian cultural scholar, a specialist in literary history and theory. For several decades, from the 1970s to the mid-1990s, he worked as a senior researcher at the Institute of World Literature in Moscow. From the mid-1990s to his death, he was a professor of Slavic Studies at the University of Vienna.

Sergei Averintsev perfectly epitomizes Russia’s openness to the world. He symbolizes that spiritual synthesis wherein the most valuable tenets of the Western world converge with the most treasured qualities of the East to yield a culture inspired by Christianity and an aspiration for a democratic humanity.

But who really was Sergei Averintsev? It would be easier to say who he was not. In the field of the humanities he was almost everything that a person can be: a philologist, a philosopher, a theologian, a cultural historian, a literary theorist, a translator, and a poet. He was a man of encyclopedic erudition that embraced Greek and Roman antiquity, the New Testament, Middle East, Byzantium, European Middle Ages, nineteenth-century Russian literature and philosophy, Russian Silver Age, and the twentieth century Western literature and religious thought. He was a philosopher in the deepest dense of the word: a seeker and lover of wisdom. As probably nobody before or after him in the Russian humanities, Sergei Averintsev interpreted cultural phenomena in multiplicity of their intertextual and intersdisciplinary projections. He was a broadly thinking humanist but with a very firm standing in humanistic and religious foundations of Russian and European culture. His thinking was a challenge to totalitarianism of any kind, be it communism or nationalism, religious fundamentalism or technocratic pragmatism. His credo was a unity of faith and freedom. He could repeat after St. Augustine: “Believe in God and do what you want”.

Averintsev was born in 1937, in the year when Stalin planned to exterminate religion in the USSR, when tens of thousands of priests were killed and tens of thousands of churches were destroyed, or turned into warehouses. Averintsev has done more than any other Russian intellectual to restore the connection of our contemporaries with the spirituality of the past and in so doing he opened the way to the spirituality of the future. Since the late 1960s, with publication of his articles in the five-volume Philosophical Encyclopedia and his book The Poetics of Early Byzantine Literature (1977), Sergei Averintsev established himself, as they say in Russia, as vlastitel' dum, or the ruler of the minds of Russian intelligentsia. He reversed the relation between politics and culture in the minds of many intellectuals. Under the Soviet regime, culture was believed to be a tool of politics. For Averintsev, politics was only one small segment of culture, inscribed in larger and spiritually deeper segments, such as literature and language, philosophy and theology. Alongside Mikhail Bakhtin, a thinker who belonged to the older generation of Russian intelligentsia and whom he greatly admired, Averintsev can be considered a founder of Soviet and post–Soviet culturology, an integrative, multidisciplinary approach to culture.