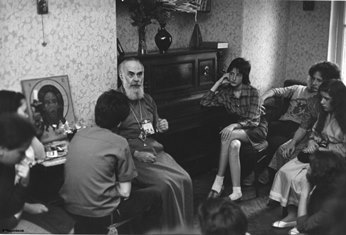 Presentation of a new book by Dr Avril Pyman (Durham)

Andrei Bloom (1914-2003) who was better known as Anthony Bloom, or Metropolitan Anthony of Sourozh, led an extraordinary life. He was an individual who sought to be in touch with his God yet in solidarity with and responsibility for a tragically disconnected society; a man of God who “knew the world”. From the difficulties of Russian émigré life that conditioned him as “a monk without a monastery”, through the trials and suffering of war and revolution, to his calling as Priest and Bishop of the Russian Orthodox Church in Great Britain, he moved between many changing landscapes, striving always to take his bearings in prayer and contemplation. In his character, joy in the good and the beautiful was compounded with ardor and tragic depths.

Avril Pyman draws on a mosaic of available evidence to offer deeper insight into the life and times of a remarkable spiritual teacher, charismatic speaker and priest whose cosmopolitan background, character and experience of science and medicine made a unique and significant contribution to Orthodox Christian thought and practice throughout the world. This biography explores how Metropolitan Anthony sought the mind of Christ to cultivate and control his own loving heart and occasionally harsh exigence.

Dr Avril Pyman was awarded her PhD by the University of Cambridge in 1958 and continued as a British Council research scholar in Leningrad. Pyman taught Russian and Russian Literature at the University of Durham and is now retired. She is the author of many articles on and translations of Russian literature and of The Life of Aleksandr Blok (2 volumes, 1979-1980); History of Russian Symbolism (1984) and Pavel Florensky - A Quiet Genius (2010).

The event will take place at 5pm on Thursday, 8 December, 2016 in the Russkiy Mir Centre (A29, Elvet Riverside).

Presentation of a book by Pam Wardell (Edinburgh)

“A Very Private Affair…” is a story of Speranza Howard (1903-95) who was born and brought up in pre-revolutionary Russia and escaped with her family, in 1920, to London. It is also a story of the Russian writer Boris Pilniak, who visited Britain just once, in 1923, but claimed to have lost his heart to a half-English girl he met in London. The identity of his ‘English wife’ was unknown until in the Russian memorabilia that Edinburgh based writer, Pam Wardell, had stored in her loft, she found two bundles of love letters written by Boris to Speranza, Pam’s aunt, during the period of 1923-29. In her book, Pam Wardell tells two stories in parallel: one about the secret life of her aunt, Speranza, and her love for the Soviet writer, Pilniak; the other about her personal journey to uncover the impact of the Russian Revolution on her family’s history.

Pam Wardell, born and raised in Glasgow, was a BBS Scotland radio producer for over 20 years. In 2001 she turned to her long-cherished project of writing a book about her mother’s family, their years spent in St Petersburg & the dramatic story of their escape from the Russian Revolution. In 2004, with support from the Scottish Arts Council, Pam went to St Petersburg to find the flat where her mother’s family had lived and to Moscow to meet Dagmar Kassek, an academic specialising in Boris Pilniak’s works and biography, who at that time was collecting Pilniak’s letters for publication (Moscow University Press, 2011). Through a unique collaboration with the graphic designer Janey Boyd (Mamook Graphics), Pam has produced a stunningly illustrated account of a 20th century life history which she will present to the audience.