2nd and 4th Dec 2014. Kate Sharpe is working with heritage managers, local societies, writers, and artists to develop walking routes related to Tales of the Frontier. This work is funded by a grant from the AHRC for Follow-on Funding for Impact & Engagement.

Workshop on Tales of Frontier and Cultural Engagement

March to June 2013, Dr Ahmed Shams El Din has been working with the Tales of the Frontier Team to address the impact of the project on communities and public policy. This post has been funded through the AHRC's Cultural Engagement Fund.

14 May 2013. Richard Hingley spoke on Hadrian's Wall: a life to the Hexham Local History Society.

4 April 2013, Richard Hingley spoke about Hadrian's Wall as a cultural frontier at the Society for American Archaeology in Honolulu, Hawaii.

10 January 2013, Richard Hingley spoke on Post-Colonial Roman Archaeology and the Roman Frontiers in a session on Entangling Colonial Narratives at the Society of Historical Archaeology Conference in Leicester. 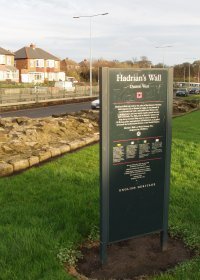