St John's College, University of Durham, 6th and 7th July 2007
In association with the Institute of Advanced Study and the Durham Centre for Roman Cultural Studies

This conference explored different aspects of the impact of religious traditions on the physical and social organization of the city between the Roman period and Late Antiquity. Geographically, the focus was on Rome and the western and eastern provinces, in order to identify both common trends and differences in direction. The aim of such an approach was to identify the interaction between local and colonial religious practices. A further aim was to discuss how citizens responded to the introduction or imposition of new religious forms.

Each session included 4 papers delivered in English or Italian. The whole project was intended to establish a strong basis for further interdisciplinary collaboration and to find new directions to develop the analysis and understanding of urban trajectories in a wider geographical and historical context. The discussion of conclusions in the final round-table session was therefore led by scholars from non-classical disciplines.

This session aims to assess the influence of religious traditions on architectural design, construction, and decoration and on its transformation. This will help to discuss and compare the permanence or transformation of local tradition in different parts of the Roman world and to analyse ritual spaces in relation to their urban environment.

In order to broaden the perspective of the conference, this session is intended to consider how specific rites or liturgical acts structured urban space and vice versa. With regard to provincial areas in particular, it is also hoped to raise the questions of whether and how colonial powers acted to control existing religious practice and authority.

14.30  Michael Sommer (University of Liverpool)
“Creating civic space through religious innovation? The case of the post-Seleucid Beka‘a valley”
15.00  Clifford Ando (University of Chicago)
“Diana on the Aventine”
15.30  Discussion: Sacred space and religious change
15.50  Tea
16.20  Martin Bommas (University of Birmingham)
“Temples for Egyptian Gods within Urban Landscape: The Roman Iseum Campense and the Red Hall of Pergamon as case studies”
16.50  Penny Goodman (University of Leeds)
“Temple architecture and the urban-rural divide in Britain and Gaul: two worlds or one?”
17.20  Discussion: ritual space in the urban landscape

The third and final session will discuss the impact made on urban areas by the introduction of new cults or by the conversion from one religion to another, whether on the part of individuals or communities, and whether voluntarily or forcibly. In particular, the session aims to discuss whether spaces were reconfigured to accommodate or annihilate religious experience and the ways in which sacred space worked to elicit religious understanding and belief.

The conference was generously supported by the British Academy, the Rosemary Cramp Fund, the Faculty of Arts and Humanities and the Institute of Advanced Study of the University of Durham 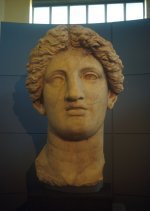