Durham University offers an exciting year-round calendar of lectures, seminars and exhibitions. Events are open to the public, so take the opportunity to engage with current debates, explore some of our beautiful buildings and grounds, expand your knowledge or learn more about our cultural artefacts. 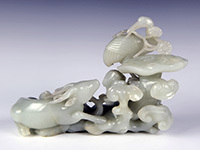 In Pursuit of Elegance: Chinese Jades from the Arnhold Collection

An exhibition celebrating the elegance of Ming and Qing dynasty Chinese jades from the Arnhold collection of Chinese art.

The jades on display in this exhibition form part of a major donation to the museum, given in memory of Gerard Arnhold, philanthropist, collector and supporter of the Oriental Museum for many years.

Gerard was born in 1918 to a well-known family of Jewish philanthropists in Dresden, Germany. The Arnhold family were forced to flee to the UK in 1936 when the National Socialist Party came to power and seized the family’s assets. Gerard studied at Kings College, Cambridge University, but left to serve in the British Army in 1940, working in intelligence and going back into Germany at a huge risk to himself. In 1953 he moved to Brazil and started up a successful technology company, which he ran for 50 years.

As a result Gerard was able to support a number of arts institutions and charities both in his birth town of Dresden and elsewhere, often requesting to remain anonymous. In the early 1980s Gerard loaned a significant portion of his Chinese collections to the Oriental Museum. He was keen that the collections should be appreciated and used to support the Museum’s educational mission. Following Gerard’s death in 2010, his family gave permission to acknowledge his generous contribution to the Oriental Museum.

The pieces displayed in the exhibition are mainly from the Ming (1368-1644 CE) and Qing dynasties (1644-1912 CE), representing the highest levels of craftsmanship including a number of pieces from the imperial workshops. This exhibition shows the many elegant forms jade can take while delving into a variety of themes, including nature, symbolism and the world of the scholar.

This exhibition has been created by students studying for the MA in Museum and Artefact Studies at Durham University.