Investigating the impact of planet collisions 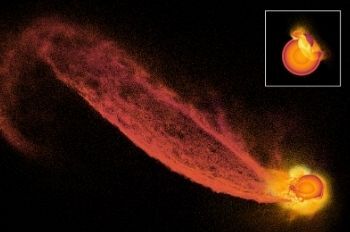 Our astronomers ran hundreds of simulations to see the effect of different impacts on rocky planets with thin atmospheres. Credit: Jacob Kegerreis.

Did you know that Earth could have lost anywhere between 10 and 60 per cent of its atmosphere in the collision that is thought to have formed the Moon?

New research led by our astronomers shows how the extent of atmospheric loss depends upon the type of giant impact with Earth.

They ran more than 300 supercomputer simulations to study the consequences of different huge collisions on rocky planets with thin atmospheres.

This has led them to develop a new way of predicting atmospheric loss from any collision across a wide range of rocky planet impacts.

This could be used by scientists who are investigating the Moon’s origins or other giant impacts.

Our researchers also found that slow giant impacts between young planets and massive objects could add significant atmosphere to a planet if the impactor also has its own atmosphere.

The Moon is believed to have formed about 4.5 billion years ago following a collision between the early Earth and a giant impactor possibly the size of Mars.

Scientists are working hard to crack the puzzle about how the Moon formed and what the other consequences of a giant collision with the early Earth might have been.

While these computer simulations don’t directly tell us how the Moon came to be, the effects seen on the Earth’s atmosphere could be used to narrow down the different ways the Moon might have been formed.

This could lead us closer to understanding the origin of our nearest celestial neighbour, and tell us about how atmospheres evolve on other planets.