Is Planet 9 really a black hole? 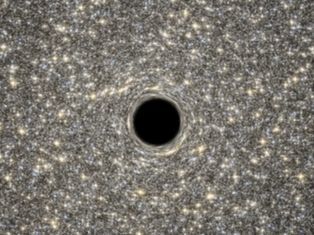 An illustration of a black hole. Image credit NASA Goddard

Is there a black hole in our solar system?

Physicists have speculated that the orbits of huge chunks of rock and ice in the outer solar system might have been influenced by a new planet called Planet 9.

It’s thought that Planet 9 could have a mass five to 20 times bigger than the Earth.

Now a team of researchers from Durham University and the University of Illinois have come up with a new theory that Planet 9 might be a small black hole left over from the Big Bang.

They looked at six unexpected events when astronomers saw the light of a star being bent by the gravitational effect of a large object.

These events correspond to objects with a mass five to 20 times bigger than the Earth, like primordial black holes left over from the beginning of the universe 13.8 billion years ago.

The researchers describe this anomaly as “remarkable”.

The researchers say they can’t rule out that Planet 9 might be a planet, but add that the experimental search for what the object is should be extended.

It’s easier to look for a planet - which reflects light from the Sun and gives out thermal radiation - than a black hole that doesn’t emit such radiation.

This could make it more difficult to spot if Planet 9 really is an ancient black hole.

However, the researchers add that it’s reasonable to expect that the black hole might be surrounded by a dark matter halo.

If this dark matter converts into observable particles, the halo surrounding the black hole would produce high-energy photons that could be seen when searching for x-rays and gamma rays.

This could provide evidence that Planet 9 is a black hole.

Read the research paper and a Q&A about the findings.

Dr Jakub Scholtz, in our Institute for Particle Physics Phenomenology led the research with Professor James Unwin, University of Illinois at Chicago.

Observations used in the research were made by the Optical Gravitational Lensing Experiment, based at the University of Warsaw.