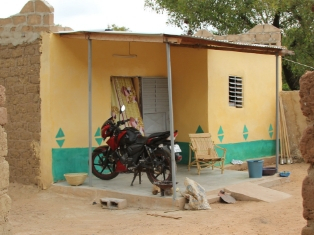 Housing in sub-Saharan Africa has dramatically improved and could help in the fight against diseases such as malaria.

A new study involving Durham University found that the number of homes with improved water and sanitation and adequate living areas had doubled between 2000 and 2015.

Better housing can improve mental health and help to fight diseases such as diarrhoea and those associated with breathing problems.

Improved construction can also prevent the spread of diseases like malaria, carried by mosquitoes, as it is harder for the insects to enter a property that is well-screened.

Such improvements include replacing thatched roofs with corrugated metal roofs and mud walls with concrete and bricks, whilst screening doors and windows.

The biggest changes to housing came in countries including Botswana, Gabon and Zimbabwe, while there were fewer changes in countries such as South Sudan.

Economic development might be a factor in better housing as improvements were 80 per cent more likely in educated households and twice as likely in wealthy homes. People mostly paid for better buildings with their own money.

The research estimated that 53 million Africans in the 31 countries studied still lived in slum conditions in towns and cities.

Poor sanitation was common among much of Sub-Saharan Africa and the research calls for governments to urgently improve water and sanitation infrastructure, particularly in towns and cities.

Governments could also speed up the work to fight diseases like malaria by making improvements in housing.

The United Nations wants universal access to adequate, safe and affordable housing and to upgrade slums by 2030.

Housing need is particularly urgent in Africa where the population could more than double by 2050.

The study is published in Nature.

The research involved Professor Steve Lindsay in our Department of Biosciences.

Discover more about Durham’s work in malaria prevention and the BOVA Network.

The study was led by the London School of Hygiene & Tropical Medicine, the Malaria Atlas Project, Oxford University and Imperial College London.

Maps and data from the study are available to download here.