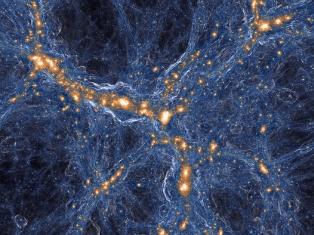 Simulation of galaxies and gas in the Universe. Credit: TNG Collaboration.

A relic cloud of gas, orphaned after the Big Bang, has been discovered in the distant Universe.

The cloud is unpolluted by stars even 1.5 billion years after the Big Bang and offers new information about how the first galaxies formed.

Gas in the Universe is usually polluted by waste from exploding stars, but the newly discovered cloud appears to be pristine.

Due to its lack of heavy elements, astronomers have concluded that it must be a true relic of the Big Bang.

Researchers made the discovery of the rare fossil using the huge twin 10-metre telescopes of the WM Keck Observatory in Hawaii.

They used the light from material falling into a supermassive black hole that sits behind the gas cloud to illuminate the hydrogen within it.

The fossil is one of only three such clouds ever found, following the discovery of two other similar relics in 2011.

The astronomers say that it is now possible to survey the skies for these fossil relics.

This could tell us exactly how rare these gas clouds are and help us to understand how some gas formed stars and galaxies in the early Universe and why some did not.

Our Institute for Computational Cosmology and Centre for Extragalactic Astronomy are partners in this research, led by Swinburne University of Technology in Australia, and also involving Saint Michael’s College, USA, and the WM Keck Observatory.