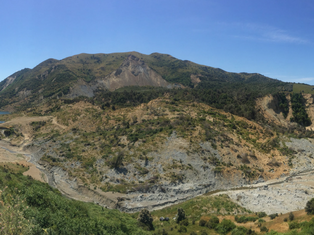 Just hours after the 7.8 magnitude Kaikoura earthquake hit New Zealand in 2016 research by Dr Tom Robinson, Department of Geography, was helping to inform the work of first responders in the area.

At the time of the earthquake Dr Robinson was collaborating with colleagues from the universities of  Canterbury and Otago in New Zealand, to test a computer modelling approach to predict earthquake-related landslides.

When the earthquake struck, the team were able to use their modelling approach to generate information about where significant landslides might have blocked roads and rivers and share this information with first responders in New Zealand. The findings of their modelling approach are published in the Bulletin of the Seismological Society of America.

Dr Robinson said: “The Kaikoura earthquake offered a serendipitous opportunity for us to test the capabilities of our modelling approach and provide valuable information to emergency responders.

“We were able to model landslide locations and run-outs, which is the maximum distance landslide debris travels, within 24 hours of the earthquake. We also produced a second refined model 72 hours after the event.”

The modelling predicted that land-sliding would be widespread and could impact major roads as well as numerous rivers.

The near-real-time analysis allowed members of the New Zealand Civil Defence and other responders to plan reconnaissance flights over the affected regions to determine where the landslides might cause further damage.

Whilst the Kaikoura earthquake did comparatively little damage to buildings in New Zealand, a country with strong earthquake building codes, a landslide inventory completed after the event counted more than 10,000 landslides, blocking roads, rivers and railways, and damaging agricultural areas.

Dr Robinson explained: “The landslides on the roads, particularly State Highway 1, which was the main road that was affected, have been catastrophic.

“A year after the earthquake, only one lane of State Highway 1 had been opened and the road remained closed overnight and during strong rain. The estimate for restoring the highway to full capacity is close to NZ$1 billion.”

For Dr Robinson the testing and use of the landslide modelling research is an important step forward in ensuring that the hazards posed by landslides are recognised and planned for.

Dr Robinson said: “For me, the really exciting thing about this research is that we’re actually able to translate hazard knowledge into usable information to show where the impacts could be and the losses that could result from this.

“Landslides used to get forgotten a lot in earthquakes, but that is changing now as recent studies have confirmed that significant damage to infrastructure such as roads often results from subsequent land sliding, and not the ground shaking that occurs during an earthquake.

“In mountainous regions such as in Nepal or China, up to 25% or more of earthquake fatalities can come from land sliding.”

Predicting landslides in near real-time

Landslides are extremely complicated to predict and are most often studied after the fact. To remedy this, Dr Robinson and his colleagues developed modelling approaches that draw from recent global data collected on landslide hazards, to see what can be learnt from multiple events and use that to predict where landslides might happen in future earthquake events elsewhere.

The researchers combined the data in their model with information on landslide reach angles, a measurement that helps determine the distance a landslide might travel. Their model is one of the first to attempt to predict where landslides might block roads and dam up rivers after an earthquake in near real-time.

Information on both of these impacts, but especially landslide dams, is important for first responders. Dr Robinson said: “Landslide dams frequently happen in remote, difficult terrain, and are often spotted only by chance.

“These dams can cause outburst flooding very quickly, and can be very dangerous to downstream communities.”

Whilst the modelling approach worked well to predict road blockages, there was an over prediction of the occurrence of landslides in general, which did lead to some limitation in the model’s use in determining the exact location of all landslides.

The over prediction is something the team will look at in more detail to understand and address the issue.

Additionally, whilst modelling after the Kaikoura earthquake had to be done manually, the team is also looking at the potential to automate the program to help reduce the time needed to make landslide predictions after an earthquake.

Dr Robinson and his colleagues say more high resolution global data on landslides, including 3D satellite imaging, could help refine the land sliding model and allow it to be used around the world. But storing and manipulating these data would require more computer capacity.