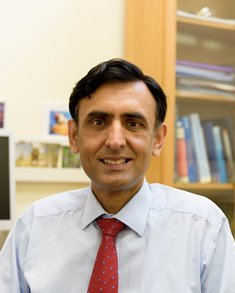 Professor Jas Pal Badyal FRS from Durham University has been named as the Royal Society of Chemistry Tilden Prize winner for 2017 for his pioneering work on the functionalization of solid surfaces and deposition of nanocoatings.

Professor Badyal and his team have undertaken fundamental research leading to the invention of a wide range of surfaces for applications such as water harvesting in arid climates, oil-water separation, clothing, smartphones, and healthcare, among others.

Super-repellent nanocoatings have for example been applied to 100 million smartphones, 75 per cent of the world’s hearing aids, and three million pairs of footwear.

Professor Badyal, who has been a faculty member in the Department of Chemistry since 1989, said: “I am very honoured to have been selected to receive the Royal Society of Chemistry Tilden Prize. I feel this award acknowledges a wide scope of research undertaken in my group by some brilliant PhD students whom I have had the privilege to supervise over the years.”

The nanocoatings, invented by the team led by Professor Badyal, use very low amounts of material and energy which minimises environmental impact compared to traditional processes. Examples include the deposition of thin, nanoscale coatings onto surfaces by reacting small molecules in the presence of a plasma to achieve high levels of functionality.

The research has been commercialised and has resulted in three nanotechnology start-up companies with hundreds of millions of products being manufactured globally.

The Tilden Prize is awarded for advances in chemistry and looks at the originality and impact of the research, as well as the quality of the results. The awards also recognise the importance of teamwork across the chemical sciences, and the abilities of individuals to develop successful collaborations.

Dr Robert Parker, chief executive of the Royal Society of Chemistry said: “It is an honour to celebrate the innovation and expertise of our community through our prizes and awards.

“We know that chemistry can be a powerful force for good, and quality research and communication of that research are more important than ever before.

“Our charitable mission is to advance excellence in the chemical sciences, and we are proud to celebrate our inspiring and influential winners, who share that mission.”

An illustrious list of 50 previous winners of the Royal Society of Chemistry’s awards have gone on to win Nobel Prizes for their pioneering work, including all of the 2016 chemistry winners, Jean-Pierre Sauvage, Fraser Stoddart and Ben Feringa.

Dr Stephen Coulson, who worked with Professor Badyal as a PhD student at Durham University, is currently Chief Technology Officer at P2i Ltd which has subsidiaries in China, Singapore and the USA.