Is the myth of British good-humour and resilience about to die a Brexit death? 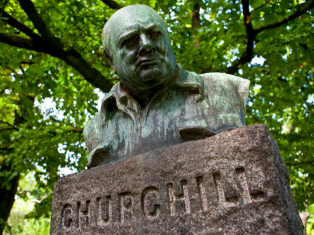 A WWII propaganda campaign promoted the British character as good humoured, resilient and trustworthy. #Brexit is now threatening that believes Dr Guy Woodward, from our Department of English Studies.

Since the 2016 EU referendum, Britain’s reputation in European centres of power has undoubtedly suffered. The painful progress of Brexit negotiations and the inability of the British government to marshal support for the withdrawal agreement in the febrile and fractious House of Commons has baffled many senior European politicians.

“Pathetic”, “distressing” and “unrealistic” are some of the kinder terms that have been used. One German MP remarked on March 20 that where once Britain had been held up as “a model of good diplomacy, of pragmatism and of self-restraint”, now: “No one would sign up to that view.”

These impressions of practicality, resilience and good humour which appear to have been attached to the British character may or may not be accurate – but where did they originate, and how did these now-threatened perceptions take hold in other European countries?

One possible source can be found during World War II, when British government propagandists sought to promote such national characteristics over the airwaves and in print, through leaflets, magazines and newspapers dropped by air. As the literary critic Mark Wollaeger has written, “effective propaganda tends to rely on the deployment of stereotypes, not on their overturning”.

In the early years of the war, much propaganda to enemy and occupied Europe sought to foment resistance to the Axis forces or to undermine their authority. Following the battle of El Alamein in November 1942, when eventual Allied victory in Europe appeared almost certain, preparations were made for the post-war reconstruction of the continent. Now propaganda was directed instead to help secure an influential role for Britain in this new era – as a new project at Durham University is discovering.

A report produced at the end of 1942 by Ivone Kirkpatrick, wartime controller of the BBC’s European Services, makes startling reading in 2019. Kirkpatrick’s report – held in the National Archives – begins by assessing current European perceptions of Britain. The average European, he writes in an accompanying note, has a “rough and ready perception of the Englishman” who is – among other things – “inclined to lecture other people for not doing things as Englishmen would do them, although quite ignorant of the reasons why others act differently from us”. Europeans also perceive a country that cannot be depended on “because we won’t say what we really want or what we are going to do”.

Against this Anglocentric background (he makes no distinction between Britishness and Englishness), Kirkpatrick proposes a new course of political warfare. The plan was to convince the European audience that “Britain has a big part to play” in shaping the post-war European social and political order. With its title: The Projection of Britain, the report advocates a campaign of indirect propaganda which articulated the British national character and national achievements in the fields of science and culture.

One trait to be emphasised was “progress by agreement” – described as “the most essential characteristic of British civilisation” – which allows political institutions to be “modified to suit changed conditions with amazing speed and smoothness”. Kirkpatrick’s note added that Britain could be distinguished from other countries by its faithfulness to “practical methods”.

Significantly, this exceptionalism was tempered by the proposal that propaganda should stress Britain’s status “as a European civilization”. Here Kirkpatrick argues that historical oddities – he cites “Ann Hathaway’s Cottage, Newton and the apple, the Old Curiosity Shop” – must be put to one side. Instead, he says: “We must show British intellectual life as a matter of free and equal interchange with the intellectual life of Europe, and the British tradition as one aspect of the European tradition.”

The campaign began immediately, and involved the production of postcards, cartoons, pamphlets, news and special feature broadcasts, books, newsreels, feature films and documentaries, which as historian Robert Cole has observed “emphasised Britain as the moral and cultural bulwark of European civilisation”.

Some material was esoteric or highbrow: British and American propagandists sought to dispel a cultural and intellectual continental blackout by producing miniature literary periodicals featuring translations of writings by prominent writers including T.S. Eliot, E.M. Forster, Rebecca West and Virginia Woolf. Other publications directly promoted the stability of British political institutions – one booklet produced for distribution after D-Day described the workings of the Houses of Parliament in wartime.

The efficacy of the vast exercise in soft power which followed Kirkpatrick’s report was questioned by many at the time – the Royal Air Force was consistently and understandably reluctant to risk service personnel and aeroplanes on missions to drop propaganda material – but echoes of his proposals for promoting the British character can be heard in some of the stereotypes currently being hastily revised across Europe.

Kirkpatrick’s diagnosis of continental perceptions of Britain raises a spectre painfully familiar from current Brexit-era European political discourse – that of an untrustworthy and indecisive entity, nevertheless intent on lecturing others.

His prescription is less familiar – of course, the notion of fostering a favourable image of Britain through government production of large quantities of printed and broadcast propaganda is neither practical nor desirable today. But Kirkpatrick’s plans – and his ability to place himself in the position of a European audience – present a stark contrast with today’s post-referendum vacillation and insecurity.