How to understand one of Stephen Hawking's final papers 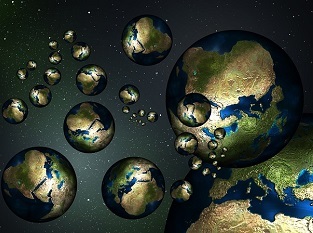 Professor Ruth Gregory from Mathematical Sciences explains what we can understand from one of Professor Stephen Hawking's final papers, which was published posthumously last week.

The late physicist Stephen Hawking made a huge contribution to cosmology during his lifetime, but he didn’t quite manage to resolve all the mysteries of the universe. Now one of the last papers he ever worked on has been published – and it introduces some new ideas about the size and shape of the cosmos. But what does the research actually say and how important are the findings?

Our conventional picture of cosmology is that our universe started with a Big Bang and then had a period of very rapid expansion, known as inflation. This created the seeds of the large, smooth(ish) universe we live in today. The problem is, inflation tends to have a problem with stopping.

This is because inflation in the early universe was actually governed by the strange rules of quantum mechanics, making it behave in unexpected ways. For example, according to quantum mechanics, particles can pop into existence from vacuum randomly only to disappear again – a quirk known as a quantum fluctuation. Applied to the early universe, quantum fluctuations could have caused some parts of the universe to suddenly start inflating faster than others.

This means that most of the explicit descriptions of inflation have the feature that, while inflation may end in some regions, it continues in others, so that the universe is “eternally inflating” overall. This means we should live in a tiny pocket of a “multiverse” of parallel universes, in which inflation has stopped and stars have formed. However, the overall multiverse is constantly creating new and inflating universes, growing like a fractal.

Such a universe would be very uneven – and this is the aspect that Hawking’s paper looks at. If we imagine the universe as a balloon, blowing up the balloon rapidly would be uniform inflation. But eternal inflation would appear like a little patch of the balloon had suddenly stopped being elastic, and would no longer expand. Given that the rest of the balloon is still expanding, this would give a very spiky surface overall.

The theories of eternal inflation and the multiverse are powerful as they can quite conveniently explain the the existence of conscious beings like ourselves when coupled with the “anthropic principle”. This essentially says that in order for life to exist, the universe has to be pretty close to the one we live in. For example – if planets did not form, then it is hard to see how life could exist, or at least, to paraphrase Star Trek – life as we know it.

If there is only one universe, it would be pretty unlikely that it had turned out just like our own. However, if there are an infinite number of universes, it makes sense that at least one of them would contain life.

But is this enough of an explanation of the cosmos? After all, we’ve never seen any of these infinite parallel universes. In the new paper, published in the Journal of High Energy Physics, Hawking and his colleague Thomas Herzog from KU Leuven University in Belgium use a toy model for our universe to probe its structure.

They use a technique known as holography – reducing three-dimensional spaces mathematically to two-dimensional projections on a surface – to try to calculate what the universe looks like. The hiding away of an entire dimension makes it much easier to do such modelling. Taking into account the possibility of random quantum fluctuations, they look at the likelihood of the multiverse being like a spiky balloon versus it being smoother in shape, and find that the universe prefers to be smooth. This suggests that eternal inflation may not actually be the preferred outcome scientists originally thought.

Instead, the duo argues that the multiverse is far from infinite, although there is likely to be more than just one universe out there. But the existence of a smaller number of possible parallel universes is much preferable to an infinite number – it means we could try to pin down what and where they are. We could also explore whether they have left any imprints in the radiation left over from the Big Bang, making the theory much easier to test.

While this is only a toy model, addressing directly the notion of eternal inflation within a more quantum cosmological setting is new and fascinating. Whether Hertog can now flesh out these ideas into a prediction for how to look for signs of other universes remains to be seen.

Although this is Hawking’s last posted paper, he was also working on many other theories toward the end of his life. For example, together with cosmologists Malcolm Perry, from the University of Cambridge, and Andy Strominger, from Harvard University, he was trying to figure out whether physical information could permanently disappear in a black hole – a question thrown up by his previous research. Further work from this collaboration will be published so we haven’t heard the last from Hawking yet.