How research uses the wisdom – and funding – of the crowd 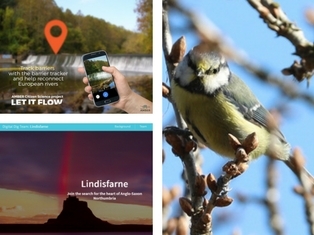 Billions of people across the world are now connected by the internet and this online crowd is regularly used to provide information and funding to projects both big and small.

Crowdfunding raises finance for a product by using the internet to ask large numbers of people for small amounts of money. Similarly, crowdsourcing or citizen science, is used to get individuals to provide information to help solve problems and inform research.

These methods have long been used by commercial ventures, but a number of Durham’s academics have also successfully used both methods to inform and fund research projects.

Professor Steve Willis, in the Department of Biosciences uses data provided by citizen scientists to track the impact of climate change on wildlife. His most recent research found that the hatching of forest birds will be “increasingly mismatched” with peaks in caterpillar numbers due to climate change.

The research team, led by the RSPB, used data collected across the UK – largely by citizen scientists – to study spring emergence of oak tree leaves and caterpillars, and timing of nesting by three bird species: blue tits, great tits and pied flycatchers. First leafing dates of oak trees were collected by citizen scientists coordinated by the Woodland Trust via Nature’s Calendar, caterpillar abundance was monitored by collecting frass (droppings) beneath oak trees, and the timing of egg laying by blue tits, great tits and pied flycatchers was recorded by the British Trust for Ornithology's long-running Nest Record Scheme.

Professor Willis and his colleague Dr Philip Stephens also collaborated with the RSPB and the United States Geological Survey (USGS) on a research project in April 2016. The results showed for the first time that common bird populations are responding to climate change in a similar pronounced way in both Europe and the USA.

Dr Stephens said: “The study was only made possible by the dedication of thousands of volunteers who survey birds on the same survey plots using the same rigorous methods every year.”

Professor Willis said: "These findings represent a new climate impact indicator for biodiversity. The volunteers from the UK and the States have helped us to understand where climate change is affecting populations, and to understand the causes of population changes of common birds that might also be affected by factors such as habitat loss and agricultural intensification.”

The project is a European initiative of scientists, hydropower and non-profit organisations called AMBER (Adaptive Management of Barriers in European Rivers). The aim is to locate and record the hundreds of thousands of man-made barriers, scattered across Europe’s rivers. Many of the barriers are completely obsolete but could provide energy, water, fishing and leisure opportunities, and might even prevent the spread of invasive river species.

Dr Lucas said: “Researchers from AMBER were shocked to find so many barriers in most rivers. But the good news is that the launch of the new app will allow us to involve citizens who can help improve the situation.

“There are many examples of solutions and people who made a difference at local river stretches.”

Information from the app is uploaded via a website (https://portal.amber.international/) to the barrier atlas. The app is available from iTunes and Google Play.

Crowdfunding to find evidence of an Early Anglo-Saxon monastery

In June 2016, Dr David Petts from the Department of Archaeology discovered a rare Anglo-Saxon grave marker which may be evidence of the first monastery on the Holy Island of Lindisfarne in Northumberland.

The discovery was made during a two-week dig, which had been crowdfunded by members of the public.

Dr Petts worked in collaboration with DigVentures, an archaeological social enterprise, who have developed a crowdfunding platform specifically for archaeological projects. The initial target was £18,000 but they raised nearly £25,000 from a wide range of online funders in just over a week.

The progress of the attempt to locate the monastery was shared online including live video-streams and regularly updated blog posts. Some of the backers were given the chance to be directly involved by paying to join archaeologists on the dig for a week.

The initiative was repeated in 2017 and hundreds of crowdfunders helped find several early Christian burials, Anglo-Saxon sculptures and monumental buildings very similar to those at other important early Medieval monastic sites like Hartlepool.

Dr Petts said: “These digs not only resulted in stunning finds, of exactly the period we were looking for, but also provided opportunities for the public to fund and participate in the project. You couldn’t get a better example of public engagement.”

He and his team will be running another crowdfunded dig from 4 to 19 September where they will continue their search for evidence of the monastery – further details can be found here.