Would Jesus have done better in politics than in the church? 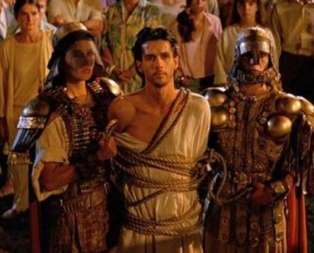 Christ as depicted in the film Jesus of Montreal. Artificial Eye

In Western societies it is often said that religion and politics don’t mix. Europe, in particular, stands aghast at a world where spirituality and power go hand-in-hand and where elders are part of the political and religious structure. So the question as to whether Jesus was exclusively a religious leader or a politician is one that would sound absurd to people in much of the world.

But take a look at Denis Arcand’s Jesus of Montreal – the best of the so-called Jesus films – and you’ll get a sense of how absurd it is to separate the politician from the religious figure. Canadian actor Daniel Coulombe (Lothaire Bluteau) plays Jesus in a passion play set in the grounds of Montreal’s St Joseph’s Oratory. The traditional story is retold via late 20th-century biblical studies – which involves lots of demythologising of Jesus alongside an astute portrayal of the first-century political context (read some Dominic Crossan for a contemporary version). The play is a popular success but causes huge controversy among the clergy of the church leading to cancellation, a cast protest, an illicit performance. Violence ensues.

The crux of the film is the transformation of Daniel into Jesus as the film unfolds. As he researches Jesus’ life and reenacts that life in the play, the events of Daniel’s own life show startling parallels to key scenes in Jesus’ life: the turning over of tables in the TV audition, breaking bread for the audience, the trial in the Montreal court, the temptation by Mireille’s lawyer (who takes Daniel/Jesus to the top of a Montreal skyscraper and shows him all he could possess). All of these have their basis in scripture as episodes form Jesus’ life.

Daniel’s own identity is merged into Jesus’. This Jesus is not the sacred punchbag of The Passion of the Christ, or the beatific vision of holiness performed by blue-eyed Robert Powell in Jesus of Nazareth. Jesus de Montréal is a scrawny, passionate Jesus who overturns injustice and challenges his contemporary society, proclaiming coming judgement. But at the same time, he models a sensitive Jesus who builds a small, if eccentric, community around mutual affection, table sharing and love. Jesus of Montreal/Daneil Coulombe makes people both reflect on who they are and fall at his feet in devotion.

Like Jesus of Montreal, the Jesus of the canonical gospels doesn’t fit well into the European model of secular humanity. On the one hand, he is far too spiritual. His parents find their wayward teenager in the Temple of all places engaging in theological discussion (Luke 2:41-52) and he regularly leaves everyone behind to go up a mountain to talk to his Father. He heals people and calls them to a new life and prophesies about future judgement. He talks about his own death in terms of salvation and wholeness and breaks bread with the poor and the rich, sinners and saints alike.

But he is also infuriatingly political. He calls his opponents a “brood of vipers” (Matthew 23:33), “whitewashed sepulchres” (Matthew 23:37) and “children of the devil” (John 8:44). He rids the Temple of money changers and market stalls. He tells parables which range from warnings to the rich and calls for equal pay for a day’s work (Matthew 20:1-16), to the love of a father for both his faithful and wayward sons in the parable of the Prodigal Son. He challenges the very basis of Palestinian culture of the time – the role of established religion, the brutality of Rome’s occupation of the land and the fleecing of the poor by the rich and powerful. To find out more about this, read Ched Myers classic reading of Mark’s Gospel, Binding the Strong Man.

But mostly Jesus lifts up those who were ignored in that society: children, women, the poor. Women are treated as equals, unheard of at the time – and, when a mob drags a young girl into the Temple courtyard accusing her of adultery and prepare to stone her, he both challenges her accusers with their own sin and also gives the woman back her dignity and refuses to condemn her (John 8). He feeds the poor, multiplying food so everyone gets their fill and, unsurprisingly, the rural poor rise up wanting to crown him as king (John 6).

He stands on a hill and proclaims that the blessed ones are the poor, those who mourn, the meek, those who hunger and thirst for justice (Matthew 5). It’s a topsy-turvy world which reflects the song attributed in the Bible to his mother when she fell pregnant with him: the Magnificat. This is a hymn which hails a god who brings low the proud and mighty and lifts up the poor and the weak (Luke 1:46-55).

Who was this Jesus? A Jesus who is neither a member of the established religion of the day nor a career politician. A man of his time who embraced politics and religion to change the society in which he lived. In the end, his opponents in both the Sanhedrin and the Roman Praetorium decided he was too political and executed him as a dissident (“lestes” in the Greek). We need to see Jesus as a Jew in occupied Palestine rather than a modern secularised European.

Perhaps the challenge for European culture in the 21st century is to rediscover a holistic approach to politics and faith – an awareness that faith envisions politics and that politics is the outworking of a moral vision at the heart of what it means to be human. An approach which seeks not to divorce the radical, political Jesus from the religious Jesus but one which allows both identities to co-exist within the one individual.