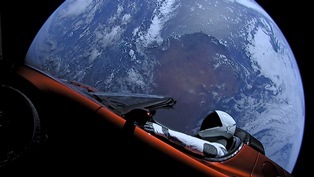 Professor Martin Ward from the Department of Physics explains why the launch of the Heavy Falcon rocket has opened up new frontiers.

Every person reading this article who is under the age of 60, is a child of the Space Age. That is to say they were born after the launch, by the then Soviet Union, of the first artificial satellite Sputnik 1. The successful launch of the SpaceX Falcon Heavy rocket on 6 February 2018 is certainly a very important milestone in the advancement of Space technology and associated Space exploration.

Although clearly not as iconic a moment as the first human Moon landing in 1969, it clearly shows that private enterprise under the dynamic and single minded leadership of the SpaceX CEO, Elon Musk, can deliver massive payloads into Space and at fraction of the cost of launches by traditional national Space Agencies such as NASA and the European Space Agency.

Why so cheap? Mostly because of the re-use of the very expensive rocket launch boosters and by employing new materials. Anyone who saw the images of the near simultaneous return to base of the two Falcon Heavy side boosters must have appreciated the incredible precision of this exercise.

In addition to cheap satellite launches, there is another very attractive prize waiting to be claimed. At present NASA is still completely dependent on Russian Soyuz spacecraft to ferry its astronauts to and from the International Space Station (ISS). A commercial alternative that would break this Russian monopoly would be extremely attractive. SpaceX is well aware of this.

There is now a race between two commercial companies, SpaceX and Boeing, to be the first non-government organisation to launch humans into Space, which could happen either in late 2018 or early 2019. Who wins will depends on many things, including the outcome of un-manned test flights of their respective spacecraft later this year. The winner will be well placed to commercialise astronaut transport to and from the ISS. SpaceX needs such lucrative contracts to fund its grandiose plans for the future.

We should remember that SpaceX was only founded in 2002, compared with NASA’s birth in 1957, yet it already has a growing list of “firsts”. It was the first private company to send a spacecraft (cargo only) to the ISS in May 2012 and it has now achieved the first privately funded payload launch to escape the Earth’s gravity - the famous red sports car aboard this week’s Falcon Heavy rocket, now on its way towards Mars and far beyond.

However, amid all the successes there have been some significant failures including an explosion on the launch pad and on another occasion, explosion of the second stage about two minutes after launch. In the history of Space flight such set-backs are common and were to be expected, and they are acceptable provided that all possible lessons are learned.

However, the risks associated with launching cargo payloads, or even a red sports car, can be acceptable at much higher levels than launches with humans on board. Furthermore it is likely, although not openly discussed, that the risks involved in Space programmes funded by private enterprise may be higher than those thought to be acceptable by national Space agencies.

This is largely because the political budget masters of the national agencies are disaster averse, because public opinion has a habit of wanting someone to blame. On the other hand, CEOs such as Musk are made of sterner stuff and are likely to accept failure as a price they are prepared to pay. It is a fact that Space Exploration will always be risky.

What risk is acceptable? Nobody would get onto an airplane if told there was a 1 in 70 chance of it crashing – but these were the eventual odds faced by the Space Shuttle crews. This is a crucial topic that this certain to be upmost in the minds of Musk and his team in the years to come.

Looking beyond the next few years, we already have some taste of what Musk plans for the more distant future. His vision is spectacular and ambitious; indeed his detractors would say unrealistic! His proposed timeline is for a human mission to Mars in the mid-2020s, with the eventual aim of building a self-sustaining colony there.

To virtually all professional Space technology gurus, this timeline sounds off-the-wall, crazy. But given the track record of SpaceX so far, and with Musk’s relentless drive and money, many would add: “Go for it, and so what if your timeline is a decade too optimistic!”

One final remark regarding the current honeymoon with private enterprise funding of Space programmes: The future may be some kind of co-operation between SpaceX and other companies, together with the traditional national Space agencies but there is still a wild card in the deck, perhaps a case of “The National Agency Strikes Back”.

The China National Space Administration (CNSA), potentially has the vast resources and could one day develop the political will to fulfil the same dreams as those of Musk and the other entrepreneurs of the final frontier.

Click here to see what Professor Martin Ward had to say about February's spectacular SpaceX Falcon Heavy rocket launch when he spoke to TRT World (Turkish Radio and Television Corporation).