Time to celebrate the unsung women heroes of peace mediation 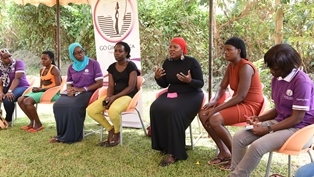 While women are active and successful mediators at the grassroots level, they remain largely invisible in international peacemaking.

Dr Catherine Turner, Associate Professor of Law, joins governmental and policy experts at a workshop hosted at Durham today, to consider what should be done to increase women's representation in high level international mediation teams.

Here, she discusses her research into this issue and explains why it is so important to raise the profile of women mediators.

The idea of peace mediation usually conjures up images of elder statesmen deployed to seemingly intractable conflicts to try and broker an agreement. Think of Kofi Annan and Lakhdar Brahimi in Syria; Martti Ahtisaari in Kosovo; or George Mitchell in Northern Ireland.

The high-level mediation that we see in the news is what is known as Track 1 diplomacy. It is an official process that occurs at the governmental level, often supported by the United Nations or other international organizations. But this is only one aspect of mediation. It is also usually the end, rather than the beginning, of mediation efforts. Earlier in the process, women play a much larger role.

Creating the conditions for formal talks

In the midst of war, it can be next to impossible to get parties to agree to talk, let alone agree to a cease-fire or a peace process. To get warring factions to the table at all requires significant mediation efforts. Track 1 processes are usually extensively supported by unofficial processes, known as Track 2 or Track 3 processes, which help to create the conditions for formal talks.

Track 2 diplomacy works with civil society representatives, such as local government, businesses or churches. It aims to bring people together to begin to discuss how to address conflict. These processes are used to create the conditions in which Track 1 talks can occur by opening up channels of communication when warring parties cannot be seen to be willing to talk to each other.

The term Track 3 is more recent in its origin. It refers to the grassroots mediation work that occurs within and between communities in an attempt to de-escalate conflict locally and improve communication. It is at this level that women are most active and where they have proved themselves to be skilled mediators.

Women play a range of mediation roles at the Track 3 level. These may be formal or informal. They may be engaged in organized grassroots mediation efforts supported by international organizations, or they may simply be mediating on an informal basis within their own community. Women can often gain access as mediators where men cannot and help to decrease tensions within a community.

They may be mediating between factions within armed groups. They may be acting as intermediaries in resource conflicts or facilitating access for humanitarian aid. Or they may be using mediation skills, such as dispelling myths and misinformation, as a means of preventing young men from becoming involved in violence.

Despite women’s active involvement in mediation at the grassroots level, they remain invisible in international peacemaking. The vast majority of United Nations mediation initiatives at the Track 1 level are led by men. But there are signs that things may be changing. Since 2011, as a result of a joint strategy between the U.N.Department of Political Affairs and U.N. Women, there have been women included on “almost all” U.N. mediation teams.

The current U.N. Secretary General, Antonio Guterres, has also made mediation an explicit priority of his term of office and has committed to increasing the number of women mediators. These are encouraging signs. So now is the time for states and international organizations to highlight the work being done by women and to harness their skills more effectively in international peacemaking.

This is not a simple process. There are deep-rooted reasons why women do not seem to rise in international mediation. These include social and cultural norms that prevent women from playing a prominent role in public life; a belief that women are simply not “political” enough to take on difficult mediation challenges; and the perception that women lack the authority to gain the confidence of warring parties.

Why women are doubly invisible

Mediation as an element of high-level diplomacy requires a proven track record that will engender respect. Men are often assumed to carry more gravitas than women. And so all attention focuses on the high-profile personality of the mediator, overshadowing other efforts that have contributed to the possibility of peace talks in the first place. This makes women doubly invisible: Not only are they underrepresented in the position of lead mediator, but their efforts at Track 2 and Track 3 are also obscured.

Addressing the invisibility of women in senior mediation roles means addressing the reasons that they are not deemed sufficiently qualified, and the process by which these decisions are made.

Raising the profile of women mediators

New initiatives are now trying to promote women in international mediation. Most notably, a number of networks of women mediators have been created at the state level to help women reach senior positions. Networks have already been created by Nordic women, African women, southern African women and Mediterranean women. They can play a vital role by helping to publicize lists of qualified women available for selection for senior positions and by supporting the career progression of younger women mediators from national to international practice.

This article was originally published on News Deeply