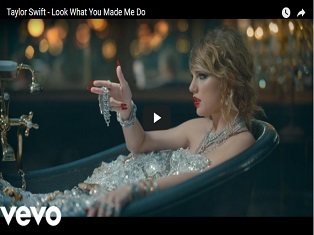 Dr Eleanor Spencer-Regan, Digital Director of the Centre for Poetry and Poetics considers what the former "pop princess" and the confessional poet have in common.

In the opening shots of the video for her record breaking new single “Look What You Made Me Do”, we see the zombie formerly known as Taylor Swift claw her way out of a grave. This shovel-wielding revenant is a far cry from the “girl next door” who, in the video for her 2006 debut single “Tim McGraw”, innocently frolicked with a Chevy-driving, chisel-jawed high school heartthrob.

But even then there were clues that this country princess would grow up to become a shrewd pop culture queen. In that song’s lyrics, she was swift to puncture the well-worn hyperbole of the country love song:

He said the way my blue eyes shined

Put those Georgia stars to shame that night

And she was also able to converse knowingly with the tropes of the genre – the “Dear Johnny” letter she leaves on her beau’s porch references numerous country hits about the “Dear John” break-up note, typically left by a woman for her former lover.

Fast forward 11 years and Swift is again conversing with songs that have gone before. This time, though, it is her own back catalogue that she revisits through a series of visual clues for the eagle-eyed fan.

If the undead Swift’s diaphanous dress looks familiar, that’s because it’s the one she wore in the video for her 2016 single “Out Of The Woods”. This is not mere thriftiness on her part, as the legend on her recently vacated grave – “Here Lies Taylor Swift’s Reputation” – makes plain.

Later, the song is punctuated with the spoken interjection:

That this new single (her first solo material since her 2014 album 1989) comes hot on the tail of a series of media controversies is no coincidence. After well-publicised romantic breakups with Harry Styles, Calvin Harris and Tom Hiddleston, and celebrity feuds with Katy Perry, and the Kardashian-Wests, Swift has also recently won a civil case against a US radio DJ who sexually assaulted her in 2013, winning symbolic damages of US$1 and raising awareness of the chronic underreporting of sexual violence against women.

The message is clear: no more Miss Nice Girl – the new Taylor Swift will give as a good as she gets.

Swift is by no means the first young woman to dramatically disown her wholesome image; for many child stars, it is a predictable (and often PR-choreographed) rite of passage. What makes Swift’s rebranding particularly interesting, though, is the way in which she draws on literary figures for inspiration as she self-consciously cites herself in a long tradition of “good girls gone bad”.

Perhaps the most famous of these women is that totem for 20th century female anguish, Sylvia Plath (whose Collected Letters will be released in October 2017).

As famous for her suicide at the age of 30 as for her small but searing body of work, Plath was creatively preoccupied with ideas and images of doubleness, death, rebirth, and reinvention. The young Plath, like the teenage Swift, was an obliging All-American blonde, who coyly posed for cheesecake shots of swimwear fashions for the Cambridge University newspaper Varsity in 1956.

It was this unthreatening image that she was later to violently reject in famous poems such as “Lady Lazarus”, “Daddy”, and “Electra on the Azalea Path”, in which a powerful female protagonist emerges, phoenix-like, from the ashes of trauma, to wreak vengeance on male oppressors.

Swift has been likened to Plath before. Lena Dunham, creator of the seminal HBO series Girls and a member of Swift’s “squad”, tweeted back in 2012:

@lenadunham "Update: @taylorswift13's album is triumphant. If she'd been here when I was in college I would have written papers on her, not Sylvia Plath."

Swift’s “Look What You Made Me Do” is startlingly Plathian in a number of ways. Just as in Plath’s poems we see a diverse cast of female figures drawn from myth, legend, and Jungian archetype (murderess, virgin, queen, lioness, lady and Godiva) all vying for position, at the end of Swift’s video, 14 Taylor Swifts, old and new, line up to take their final bow, and the antipathy between them couldn’t be clearer. Will the real Taylor Swift please stand up?

As literature graduates everywhere could tell you, one of the most disquieting aspects of Plath’s poem “Daddy” is the naive nursery rhyme patterning juxtaposed with Nazi and Holocaust imagery, coupled with the repeated crooning “ooo” sounds, suggestive of both baby talk and pillow talk:

I have always been scared of you,

With your Luftwaffe, your gobbledygoo.

And your neat mustache

And your Aryan eye, bright blue.

In Swift’s chorus, too, we hear this knowing breathiness – “Ooh, look what you made me do / Look what you made me do” – as she nonchalantly crashes a gold supercar into a jewellery store, writhes in a bathtub filled with diamonds, and mobilises an army of latex-clad fantasy girls (“living dolls” straight out of Plath’s poem “The Applicant”).

It is in the refrain, though, that Swift identifies herself most confidently as one of Plath’s risen women. Echoing the Lady Lazarus with nine lives who asserts, “Dying / Is an art, like everything else / I do it exceptionally well”, Swift recounts, “But I got smarter, I got harder in the nick of time / Honey, I rose up from the dead, I do it all the time.”

Both women acknowledge the rapacity of public interest in their lives. Swift’s 2014 singles “Blank Space” and “Shake It Off” satirise the media portrayal of her as “a girl who’s crazy but seductive but glamorous but nuts but manipulative”, and Plath’s Lady Lazarus turns the tables on “the peanut-crunching crowd”, exploiting them as they seek to exploit her:

There is a charge

For the eyeing of my scars, there is a charge

For the hearing of my heart.

The woman formerly consumed by the male gaze becomes the consumer as she warns: “Out of the ash / I rise with my red hair / And I eat men like air.” Swift similarly warms to her new role as a femme fatale as she half-threatens, half-promises: “I’ll be the actress starring in your bad dreams.”

So what’s next for Taylor Swift? If the chart performance of “Look What You Made Me Do” is anything to go by, it’s even bigger things. Having clapped back to her haters with this self-reflexive single, she’s now got the ticket touts in her sights.

They would do well to heed the lines from Plath’s “Lady Lazarus” – “Beware / Beware”.

This article was published on The Conversation - to comment please see the original article.