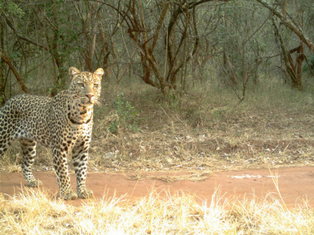 Large carnivores are in decline all over the world. Threats like persecution and loss of both prey and habitat are key contributors. The planet’s top biodiversity hotspots have already lost around 90% of their primary (undisturbed) vegetation, driven by factors like growth of infrastructure, agriculture and the removal of natural resources.

These are some of the key factors that have caused the number of wild lions across the globe to fall by over 40% in the past two decades, and have resulted in a decline in the number of cheetahs of 50% over the past forty years.

In Zimbabwe cheetahs depended heavily on private land, but the amount of private land has been reduced by 90% over the last 17 years. This loss has been caused by factors like the country’s land reform programme, which was set out to redress the historical imbalances in land tenure resulting from colonial practices. Under the programme, land previously owned privately by large-scale commercial white farmers was distributed to black Zimbabweans.

But it’s becoming clear that privately owned land plays an extremely important role in conservation, as state owned conservation areas alone aren’t enough to keep large species out of danger. A major problem is that the land reform programme was implemented in a chaotic way. This meant that no consideration was given to how to manage the wildlife that had previously lived in the area. The result was a dramatic fall in the number of carnivores.

Until 2000, 34% of land in Zimbabwe was privately owned, 13% was state owned conservation and forestry areas, and 42% was communal land. The remainder of that was made up of old resettlement areas, state farms and urban developments. Private land supported 80% of Zimbabwe’s cheetahs. But since 2000, 90% of this privately owned land is thought to have been resettled. Large numbers of subsistence farmers – making enough for their homes but not enough to sell – now occupy these farm spaces.

In instituting the land reform programme, the survival of the species that depended on privately owned land was pitted against the needs of the people to survive off the land. This is a widespread problem, not one confined to Zimbabwe. But the solution could lie in how land reform is planned. Instead of replacing successful wildlife areas with subsistence farming, keeping the wildlife while allowing more people to benefit economically could hold the key.

Our studies showed that large carnivores (weighing more than 19 kg) such as African wild dogs had high densities on private land. On neighbouring land that had been part of the same conservancy but had now been resettled, we found no signs of cheetahs, leopard, lion, African wild dog, or brown hyenas. We did however find very few tracks from spotted hyenas.

Similar trends were also evident for all other mammals studied, from baboons to giraffes.

If these trends are representative on a national scale, our models estimated that carnivore populations have declined steeply since 2000 due to land reform. We predicted that the number of cheetahs in Zimbabwe dropped to approximately 120 individuals. A subsequent nationwide interview survey estimated that only 150-170 cheetahs remain across national parks, private land and communal areas. This represents a fall of 85%, thought to be largely due to land reform.

The low abundance of wild mammals on resettled land appeared to be linked to the high density of people that now occupy the land. People have cleared the natural vegetation to grow crops and graze livestock, causing habitat loss, fragmentation, and loss of prey for the carnivores.

Bush meat poaching was also rife on private land close to resettled areas. Between 2001 and 2009 over 4,000 poachers captured and over 84,000 snares removed in one conservancy.

Land reform didn’t just affect the wildlife. We found that farmers on resettled land, reported levels of cattle predation by large carnivores that were three times greater than that of farmers on neighbouring communal land. This was despite resettlement farmers working harder to reduce predation by taking measures like kraaling (enclosing) their cattle at night or herding their animals during the day.

As land reform programmes progress in other countries, what lessons can be learnt from Zimbabwe’s experiences?

By planning resettlement schemes carefully as opposed to allowing them to develop haphazardly, authorities could focus resettlement in areas of greater agricultural potential. At the same time, it’s important to maintain connectivity within wildlife populations.

Using fencing that cannot be used to make snares could help. Strands of straight fencing wire is often stolen and used for snaring, but other fencing wire materials such as square mesh cannot be easily made into the loops used by poachers.

Importantly, land reform doesn’t have to mean changing land use. Land reform initiatives should maintain wildlife as a land use where it’s suitable, while diversifying land ownership. Leasing resettled land back to the former owners could also benefit wildlife while also retaining expertise and generating more income for a broader array of people than switching to subsistence farming.

The hope is that integrating community members as stewards of the land and helping them to benefit financially from wildlife, could encourage them to protect rather than poach animals. This will create durable solutions to the land issue.