Twenty years on, Harry Potter continues to cast a spell on readers 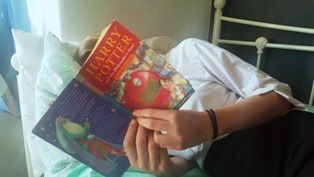 Dr Eleanor Spencer-Regan Vice-Principal and Senior Tutor of St Chad's College and member of the Department of English Studies considers the enduring appeal of Harry Potter.

Twenty years on from the first book, Harry Potter continues to cast a spell on readers

A couple of weeks ago while at Durham’s Pride Parade, my attention was caught by a teenager carrying a placard which read:

"If Harry Potter taught us anything it’s that no one deserves to live in a closet."

A quick Google search revealed that this powerful adage – originally a poster created by The Youth Project, an LGBT charity in Nova Scotia, Canada, and later retweeted by JK Rowling – has been doing the rounds online for a number of years.

And it’s not the only Harry Potter-related slogan to make an appearance at recent marches or protest events. At the worldwide Women’s Marches, which took place in January, there were numerous “Dumbledore’s Army” and “Hermione wouldn’t stand for this!” placards on show.

What these placard reminds us of is that two decades on from the publication of Harry Potter and the Philosopher’s Stone, JK Rowling’s novels are about so much more than just witchcraft and wizardry. For many young people, Harry Potter is a familiar, even comforting, frame of reference that can help them to process and understand their experiences. And this is particularly the case in the current context of increasing division and inequality in both the US and Britain.

Though Hogwarts is clearly a fantastic and fictional setting, the characters experience real life trials and traumas – bereavement, loneliness, persecution, jealousy, unrequited love, guilt, and bullying, to name but a few.

There are also the “stock” characters common to everyone’s school days – the class bully and his goons, the “insufferable know-it-all”, the school jokers, and the sadistic teacher.

Part of the appeal and achievement of the series, though, is the way these characters develop in complexity as Rowling’s readers grow and mature. So that assumptions made about characters upon first reading are challenged and tested by the events and revelations of the later books.

In the first novel, for example, Dumbledore and Snape form the pairing of “good teacher vs bad teacher”. Both are essentially unknowable to the characters and to the reader, who cannot yet see beyond Dumbledore as the all-knowing, twinkly-eyed, grandfatherly character and Snape as the black-eyed, evil-tempered “malevolent bat”.

But as the series progresses, these two characters move through mirror image character arcs. The “good” or even “perfect” Dumbledore is humanised and made relatable as we discover he is racked with guilt and self-blame about his early association with the fearsome dark wizard, Grindelwald and his part in the death of his sister, Ariana.

“Bad” Snape, on the other hand, is rehabilitated and made sympathetic through the back story of his unrequited love for Lily Potter – Harry’s mother – his anguish at her death, and his lifelong mission to atone for the sins of his youth. They are no longer stock heroes or villains but believable characters with complex motivations.

In this way, there is something powerful about literature that compels us to examine and revise our first impressions, assumptions, and opinions. It teaches us to be willing and able to do this in real life, too.

Before the likes of Harry Potter, 18th and 19th-century children’s literature was intended as instruction: the “good” were rewarded and the “bad” were punished – with “bad” behaviour linked to “bad” character and vice versa.

In contrast, a series like Harry Potter helps today’s young readers to appreciate that the world, and the people in it, are not easy to understand or “sort” in the Hogwartian sense. Gryffindors may be cowardly – think Peter Pettigrew – and Slytherins may be motivated by love rather than by ambition, for example when Narcissa Malfoy chooses to lie to Lord Voldemort about Harry being dead in the seventh novel.

A recent study from the University of Cambridge supports the idea that reading and literature can help children to learn about the world and the people around them. It found that:

"Reading fiction provides an excellent training for young people in developing and practising empathy and theory of mind. That is, [an] understanding of how other people feel and think."

Or as Hermione would put it, reading fiction helps you not to have “the emotional range of a teaspoon”. And it is this emotional range and empathy, found in books such as Harry Potter, which can help children to navigate the complex and magical world we all share.

An inexhaustible source of magic

But of course, though the world of Hogwarts and Diagon Alley may offer us an escape from our “muggle” existence, theirs is a world as marred by inequality, oppression, and danger as our own.

And in this way, the books create a space where both children and adults can explore and process pressing questions of morality, responsibility, conflict, and trauma at a safe distance.

JK Rowling has said that while she doesn’t believe in the “magic of waving a wand and making things happen”, she does believe in “the magic of imagination and the magic of love”. Let’s add to that another kind of magic that we can all believe in and which continues to be very much part of our lives – and that is the inexhaustible magic of the world of Harry Potter.