What's the difference between TPIMs and control orders? 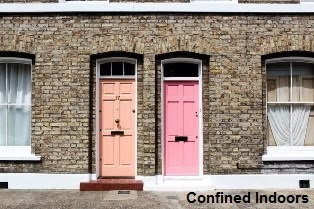 In the wake of the recent terrorist attacks in London and Manchester, Theresa May says the security services need more counter-terror powers. The prime minister said the UK should be “doing more to restrict the freedom and the movements of terrorist suspects when we have enough evidence to know they present a threat, but not enough evidence to prosecute them in full in court”. She went on: “If human rights laws stop us from doing it, we will change those laws so we can do it.”

Control orders emerged under the Prevention of Terrorism Act 2005, introduced by Tony Blair’s Labour government. They could be imposed by the home secretary, but with court review, on the basis of reasonable suspicion of involvement in terrorism-related activity. In their earliest iteration as “heavy-touch” orders, they were used to impose a range of curbs on the liberty of terrorist suspects. The curbs included 18 hours of house detention a day, sometimes combined with forced relocation.

In 2012, David Anderson QC, then independent reviewer of terrorism legislation, found that control orders were under-used. Between 2005 and 2011, 52 people had been subjected to control orders, but by the end of 2011, only nine were in force.

In 2010, influenced by the Liberal Democrats, the Conservative-led coalition government decided to abandon control orders. It deemed they had been discredited after some high-profile cases in which the courts ruled control orders had breached human rights.

But the rise in “home-grown” terrorism meant that the search for effective measures to use against nationals deemed a threat remained a concern. The government decided to retain a version of the control orders model by introducing TPIMs, which are more compliant with Article 5 of the European Convention on Human Rights which protects the right to liberty.

TPIMs allow for much briefer periods of house arrest and in their first iteration (TPIMs Mark I) did not allow for forced relocation. The lengthier house detention requirements under control orders were relaxed, becoming only an “overnight residence requirement”. TPIMs provide for a range of more limited restrictions on a suspect’s movement (including electronic tagging), communication and property. Travel abroad is now prevented without permission of the secretary of state. A TPIM can only be imposed for a two-year maximum period.

TPIMs, like control orders before them, were under-used and only three TPIMs were still in force at the end of August 2015. This led to criticism that they were too ineffective to deploy and recommendations that they needed strengthening. That occurred under the Counter-Terrorism and Security Act 2015, which created TPIMs Mark II.

The forced relocation obligation previously available under control orders was reinstated by the 2015 Act in somewhat modified form and a new restrictive travel measure was introduced.

New prohibitions relating to access to firearms and explosives were also included. Suspects can also be required to attend appointments with specified persons to further their de-radicalisation. Proof of involvement in terrorism-related activity to the civil standard of proof is now needed, not merely reasonable belief, placing a somewhat higher burden on the state to impose a TPIM.

A modest increase in the use of TPIMs from mid-2016 onwards then occurred, but the number of TPIMs in place, even in their somewhat strengthened form, currently remains low. In October 2016, reports suggested that only six were in force.

Alongside the TPIMs Mark II, draft legislation exists that would allow for the introduction of an enhanced version called ETPIMs. These were written into a draft version of the Enhanced Terrorism Prevention and Investigation Measures Bill in 2012. Although not yet enacted, this Bill could be brought forward at any time as emergency legislation under “exceptional circumstances”. The level of risk posed currently by certain very high risk suspects, including returnees from fighting with so-called Islamic State in Syria, might provide a basis for its enactment.

The fact that some of the perpetrators of the recent terrorist attacks in London and Manchester were “home-grown”, has led May to consider a wider use and strengthening of TPIMs – possibly by introducing ETPIMs. Such strengthening would probably mean enabling a TPIMs Mark III to impose longer periods of house detention, and possibly to extend the current maximum two-year maximum duration.

Yet, both TPIMs and control orders before them have been very sparingly used, suggesting that the security services do not view their widespread use as valuable. Suspects can abscond from a TPIM (two did so in 2012 and 2013), so a determined terrorist under one is unlikely to be deterred from carrying out an attack.

In order to place a suspect under a TPIM, he or she must be identified first as posing a possible threat. For that to happen, the intelligence must be there – and shared with the relevant authorities. It is not apparent that a TPIM would or could have been imposed on the men who carried out the Westminster and London Bridge attacks, since the security services did not deem them to represent an imminent threat. It is estimated that about 3,000 people are in the UK who could be high risk; but it may be very difficult to differentiate between the levels of risk they present. Radicalisation can happen rapidly, and a person might become high risk suddenly.

If someone is identified as high risk, they will be subject to resource-intensive continuing surveillance. Placing them instead on a TPIM could mean that the opportunity to gather evidence for a prosecution of a terrorism offence is lost.

TPIMs may have value in relation to certain suspects in the sense of decreasing the likelihood that they might engage in terrorism-related activity for the duration of the TPIM (up to two years). They received the support of the counter-terror review 2011, and of the previous independent reviewer of terrorist legislation. But the practical problems and lack of use made of them over the last six years, while the threat level has remained high, do not suggest that it is wise to turn to TPIMs as a significant part of the solution to the current terror threat.

This article was originally published on The Conversation. If you would like to comment please see the original article.