Disagreements on what Europe means go back to the 16th century 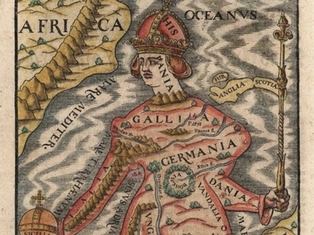 Niall Oddy, Durham University, explores how the idea of Europe was forged.

It is tempting to regard the history of Europe as a tale of gradually closer union, an evolution now imperilled by the forces of nationalistic populism that have brought Brexit and the growth of far-right political parties across the continent. In reality, the story is not such a neat one – and the meaning of Europe has always been up for debate.

Take the 16th century as an example. Back then, Europe as an idea and a marker of identity was becoming more prominent. So much so that by 1623 English philosopher Francis Bacon could refer to “we Europeans” and the continent was depicted as a queen.

The cultural movement of the Renaissance sparked an enthusiasm for all things classical – including the word “Europe”, which may have derived from the Greek name for the goddess Europa. At the same time, the voyages of discovery following Christopher Columbus’s landing in the Americas in 1492 led to a greater knowledge about the world at large. With this came a corresponding deepening of the sense of “us” versus “them”, of what supposedly made Europe and Europeans different.

This identification with people from across the continent had also been spurred by the westward advance of the Ottoman Empire following the fall of Constantinople in 1453. The Reformation and subsequent breakup of the church weakened the idea of Christianity as a unifying badge of identity and so Europe was able to articulate this growing collective sentiment.

Yet some of the major thinkers of the period rarely used the word “Europe”. The term appeared only ten times in the works of writer William Shakespeare, where it was used not with any specific geographical meaning but for rhetorical exaggeration. In the play Henry V the Constable of France assures the Duke of Orleans that his horse “is the best horse of Europe”. And in Henry VI, Part 1 the Duke of Bedford promises that his soldiers’ “bloody deeds shall make all Europe quake”.

It is telling that three of Shakespeare’s ten utterances belong to that master of comic overstatement, Falstaff. In Henry VI, Part II he says: “An I had but a belly of any indifference, I were simply the most active fellow in Europe.” These are not the stirrings of a sense of cultural unity, of Europe as a great civilisation. The word “Europe” as Shakespeare used it is empty of meaning beyond that of a vast expanse.

The term popped up even less in the writing of French philosopher Michel de Montaigne – just once in the one hundred and seven chapters that make up his Essays. Montaigne used the word as a geographical marker: recalling the myth of Atlantis, he wrote of the kings of that island extending their “dominion as far into Europe as Tuscany”. Curiously, this sole instance of the term Europe appeared in an essay about the New World, On Cannibals, in which Montaigne wrote about the customs of the Tupinambà people of Brazil. Although he contrasted them with what he calls “us”, he did not use the word Europe in these comparisons.

But his contemporaries do. André Thevet, a Franciscan friar who had also journeyed to South America, wrote enthusiastically of the Spanish conquest of the New World: “You will find there towns, castles, cities, villages, houses, bishoprics, states, and all other ways of living that you think it was another Europe”. Thevet championed the superiority of what he called “our Europe”.

Montaigne was much more sceptical: “We may call these people barbarous in respect to the rules of reason, but not in respect to ourselves who in all sorts of barbarity exceed them.” Where Thevet regarded Europe as a cultural model to be exported, Montaigne condemned empire building in the New World. Montaigne articulated a sense of affinity with the Spanish and Portuguese by referring to “we”, “us” and “ourselves”, but – though like Thevet he could have done – he did not name this community Europe.

Some people continued to prefer the label “Christendom” to articulate a collective identity. But others were not wedded to such overarching notions of belonging. Jean de Léry, a Calvinist pastor who had travelled to Brazil, did not use the word “Christendom” and used “Europe” sparingly in a geographical, not a cultural, sense. Léry had suffered at the hands of Catholics during the French Wars of Religion and felt no affinity with them. His allegiances were much smaller – to Calvinism and to France.