Trump's travel ban is nothing to do with national security 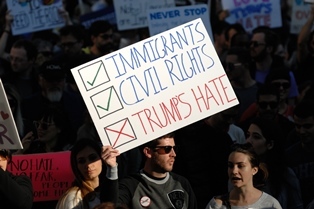 Dr Alan Greene from the Law School explains why Trump’s executive order on refugees and foreign arrivals has everything to do with the optics of the situation.

In the two month interregnum between the 2016 presidential election and Donald Trump’s inauguration, many hoped that the new president’s bark would be worse than his bite – that the office would make the man, rather than the man remaking the office. It took Trump a week to dispel this hope, and to signal to the world that he means business.

The last straw was his executive order Protecting the Nation From Foreign Terrorist Entry Into the United States, which bans nearly all passport-holders from Iraq, Syria, Sudan, Iran, Somalia, Libya, and Yemen from entry into the US for 90 days. It also puts an indefinite ban on Syrian refugees.

The order is supposedly meant to protect the nation from foreign terrorists – but it has nothing to do with keeping Americans safe. It is an act of manipulative security politics, and its motives lie elsewhere.

The order’s supposed policy motives fail on simple logic. Since 1975, no terrorist from any of the seven countries listed has been responsible for a fatal attack on US soil. Meanwhile, the radical Islamists who carried out the San Bernardino attack and the Orlando massacre were not from Trump’s seven listed countries – two were in fact US citizens.

And that’s ignoring attacks from a white supremacist on an African-American church in Charleston, South Carolina, or the shooting at a Planned Parenthood clinic in Colorado Springs by an anti-abortionist. Then there are the US’s all-too-common mass shootings, which don’t get the “terrorism” label. (If Trump were serious about sacrificing liberties to increase security, perhaps severe gun control would be a better place to start.)

Similarly, if Trump were genuinely concerned about threats to the US, he would not have given his radical political advisor Stephen Bannon a full seat on the National Security Council and downgraded the roles of the chairman of the Joint Chiefs of Staff and the director of national intelligence, who will now attend only when the council is considering issues in their direct areas of responsibilities.

All this points to the same stark fact: Trump’s executive order on refugees and foreign arrivals has everything to do with the optics of the situation.

This is not in itself unusual. After a terrorist attack, democracies often overreact by introducing draconian restrictions on human rights in the name of national security. It is, unfortunately, not uncommon for these measures to irrationally scapegoat some “them” without making “us” any safer.

After September 11 2001, for example, the UK introduced indefinite detention without trial pending deportation for non-UK citizens suspected of terrorism. The House of Lords and the European Court of Human Rights, however, found that such a measure was unjustified as it only affected non-UK citizens, despite the fact that UK citizens also posed a terrorist threat (as the July 7 2005 London bombings and the murder of army officer Lee Rigby proved).

In these post-attack moments, governments react because they believe they have to. They act to alleviate the anxiety of a fearful public, and to show that they’re back in control. After all, terrorist attacks have effects far beyond the loss of life; their real impact is to show that a government cannot protect its citizens. It is an emasculating event for a government, which must then react to re-assert itself.

The strange thing about Trump’s actions is that he isn’t reacting to a specific terrorist threat or perceived risk increase. Rather than some major attack, this particular policy was precipitated simply by a change in government. It is as pure a political act as they come – but even if the principal motive is grandstanding, this order and the others Trump is signing are anything but harmless.

There are good grounds for believing that they are illegal and his firing of acting Attorney General Sally Yates for instructing officials to not comply with his executive order adds fuel to this fire. But the problem with relying on courts to halt Trump’s executive orders is that they take a long time to make a decision.

While an emergency Habeas Corpus challenge was heard soon after Trump signed the order, the judgement issued was only a temporary stay until the full case can be heard. In the meantime, many people are stuck in legal limbo, visas are being cancelled and lives are being ruined, all in the name of national security – but really in the service of a president trying to assert himself.

Constitutions and human rights laws do not enforce themselves. Similarly, they remind us that much of the president’s power is not granted by the constitution alone; it’s “soft power”, the power to persuade and influence, to frame and shape the public agenda and public debate. Trump’s early actions show us that although much of his power may be “soft”, it’s certainly not harmless.