Building a universe in a supercomputer

You can’t physically crash a planet into another planet in a lab to see what happens or look quite far enough back in time to see how the universe might have formed. So what do you do?

At Durham we use supercomputer technology to simulate the universe as we seek to unravel its mysteries.

How do galaxies form? What are dark matter and dark energy? And what will be the ultimate fate of the universe?

The COSMA supercomputer – with the memory of about 25,000 high-powered laptops - allows researchers to answer these big cosmological questions.

COSMA is hosted by Durham as part of the Science and Technology Facilities Council-funded DiRAC High-Performance Computing facility to support researchers across the UK.

Our cosmologists feed the rules of physics into COSMA to create virtual galaxies in precise detail.

They add dark matter – which scientists believe provides the scaffolding for cosmic structures to grow - star forming gas and the dark energy thought to be driving the universe’s expansion.

They then compare their simulations with astronomers’ observations to see if they match the universe we see today.

We also simulate huge collisions between planets to understand how they formed.

We can smash a huge object into Uranus to try and work out why the planet is tilted on its side.

And we can change the speed and angle of the crash between the early Earth and a proposed Mars-sized planet called Theia to see how this might have led to the birth of our Moon.

COSMA also supports research into particle physics and is an important part of our work in applying data analysis techniques to solve problems in industry and health.

Our current machine is 3,000 times more powerful than the first COSMA of 20 years ago – so who knows what discoveries await us? 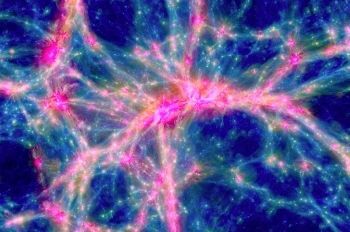 The EAGLE Project is a supercomputer simulation aimed at understanding how galaxies form and evolve. Credit the Virgo Consortium for Cosmological Simulations