What bonobos could tell us about adoption in humans 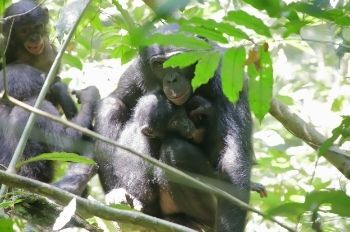 Flora suckling from her adopted mother Marie, while Marie's biological offspring, Marina and Margaux, are playing nearby. Credit: Nahoko Tokuyama

We’re part of an international team that has seen the first evidence of wild bonobo apes adopting infants who were born outside of their social group.

Adoptive mothers in the wild are usually related to orphaned infants or sometimes young females will adopt orphans to improve their own maternal skills.

But in two separate cases scientists, including a psychologist from Durham, saw adoption among bonobos from different groups living in the Democratic Republic of Congo.

The researchers say their findings could help explain the emotional reason behind why people readily adopt children who they have had no previous connection with.

Chio, thought to be a post-menopausal female bonobo aged between 52 to 57 years old, was seen to adopt three-year-old Ruby who had been part of another unknown group.

Neither Chio nor Marie, who’d already had their own offspring, had any family connections to their adopted infants or any strong social connections with the youngsters’ biological mothers.

The adoptive mothers were seen carrying, grooming, nursing and sharing food with their adopted youngsters.

Ruby and Flora were also seen suckling at their adopted mothers. In Ruby’s case, she might have been suckling for comfort as Chio is unlikely to have been producing milk.

Bonobos, alongside chimpanzees, are one of the closest relatives to human beings.

The researchers say that the behavior they’ve seen in the apes could suggest that adoption amongst humans is driven by a selfless concern for others and an emotional desire to offer care to someone who we have no previous connection with.

The bonobos in this study have been observed by scientists since the 1970s and researchers have come to know the individuals in each of the groups.

Our researchers plan to continue their observations of the bonobos once Covid-19 restrictions allow.