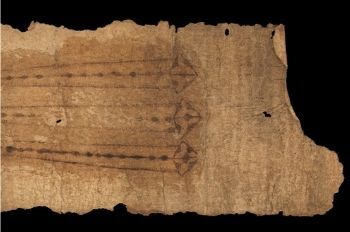 The birthing girdle from The Wellcome Institute

A 500-year-old parchment birthing girdle could give us more insight into childbirth for medieval mothers.

A research team, including one of our experts, looked at non-human materials detected in one of the few surviving English girdles to see what their significance was in medieval birthing procedures.

These materials offer direct evidence that such girdles were physically worn like a chastity belt, to help support pregnant women during childbirth.

Important protection in a perilous age

Childbearing in medieval Europe was a highly perilous time with considerable risks for both mother and baby.

The Pre-Reformation Church in England offered numerous talismans or relics to pregnant women hopeful for a safe delivery – including birth girdles, made from different materials including silk, paper and parchment.

The team used erasers to delicately rub the fragile parchment and analyse the girdle using a non-invasive sampling technique called eZooms – originally developed to identify the animal species from which ancient parchments were made.

The team detected numerous non-human proteins including honey, milk and plants which have all been documented in medieval texts as treatments relating to pregnancy and childbirth.

As girdles were frequently kept in monasteries and were likely revered as relics imbued with spiritual powers, this means that it may have been treated with veneration.

Therefore, this reduces the likelihood that honey was merely spilled on it during lunch in the refectory, but instead acquired through its major use: the labour and delivery of childbirth.

The analysis was undertaken by an interdisciplinary team of researchers from Durham, the Wellcome Institute and the University of Cambridge.