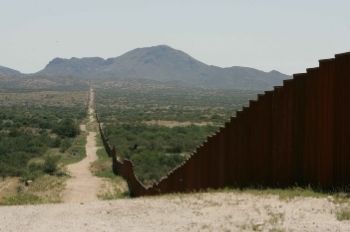 Border barriers, such as this along the USA-Mexico border, present an obstacle for many species whose ranges are shifting under climate change.

Human-made borders like the USA-Mexico border wall could make it difficult for almost 700 mammal species to adapt to climate change.

Our scientists have identified 32,000km of borders fortified with fences and walls that could potentially stop large numbers of animals from reaching more suitable environments.

Borders between the USA and Mexico, China and Russia and India and Myanmar could be the most ecologically damaging.

The USA-Mexico border wall alone could obstruct the movement of 122 mammal species displaced by climate change including the Mexican wolf, jaguar and jaguarundi.

Mammals that could be obstructed by human-made borders across the world include leopards, tigers, the critically endangered Saiga antelope, and cheetah.

According to our researchers, a third of mammals and birds will need to find suitable habitats in other countries by 2070 due to climate change.

This movement is most likely to happen between the Amazon rainforest and tropical Andes, around the Himalayas, and in parts of Central and Eastern Africa.

Our researchers are calling for more cross-border conservation initiatives and habitat corridors to reduce the problem.

As well as political borders, our researchers also looked at likely impacts of ongoing climate change on species within countries.

They found that biodiversity loss is likely to be most severe in countries that are less responsible for the emissions that are driving climate change.

They are urging world leaders to reduce the risk to biodiversity by committing to ambitious reductions in greenhouse gases when they meet at the UN Climate Change Conference (COP 26) in Glasgow this November.

* Homepage carousel picture - Sloth Bears are an example of a mammal whose movement could be affected by the India-Myanmar border: Credit Kevin Bidwell from Pexels.